Statistics show that nearly 70 per cent of the vehicles registered in Vijayawada are two-wheelers and close to 20 per cent are cars.

Statistics show that nearly 70 per cent of the vehicles registered in Vijayawada are two-wheelers and close to 20 per cent are cars. According to 2011 Census, the city has a population of 10.24 lakh and the number would have crossed 15 lakh by now. However, the city has only 464 APSRTC buses against the required 600 buses. Speed limit is 40 km/hr during the peak hours on Mahatma Gandhi Road, Eluru Road, BRTS Road and other stretches in the city. 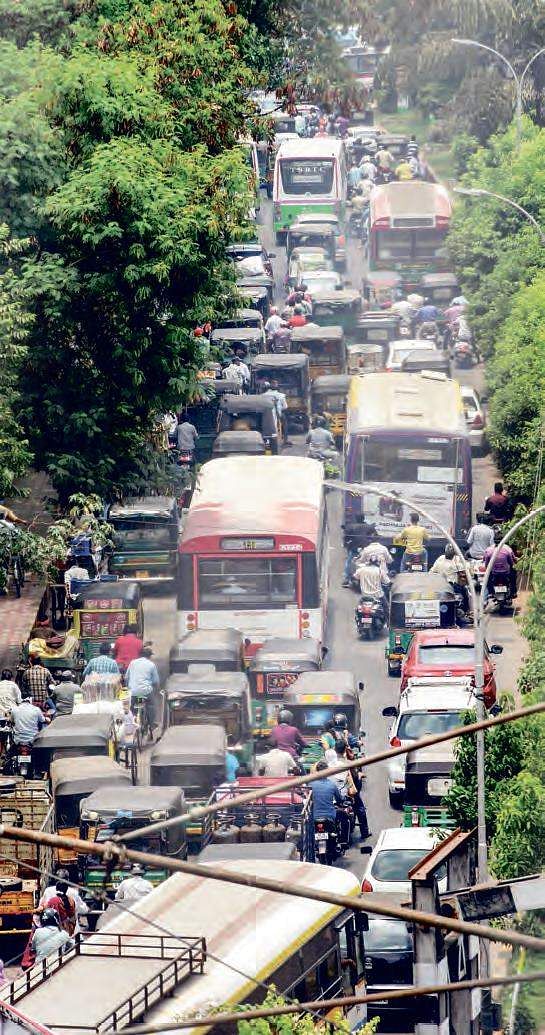 With two flyovers moving at a snail’s pace, one near Goddess Kanaka Durga temple and the other at Benz Circle and road widening plans being hit by land acquisition, traffic snarls in the city on different arterial roads are increasing day by day. In October 2017, the Vijayawada Municipal Corporation (VMC) in association with R&B department had proposed to develop 14 alternate roads connecting the major junctions in the city to provide respite for motorists. However, the development of alternate roads in the city is under progress and the officials somehow managed to complete the Mahanadu Road.

Further, the beautification works and other development works is increasing the traffic snarls at various locations. The civic body has demolished the existing central dividers on various roads and expanded them to improve greenery on it but failed to increase the width of the roads. Another major problem haunting the residents is lack of proper parking space. At present, the city has 11 parking slots and in 2017 traffic police booked maximum number of cases against wrong parking and no entry.

Though the civic body and city police officials have tried implementing various plans to sort out the issue temporarily, parking continues to be a major problem in the city, especially in One Town area where the streets are narrow and congested as VMC’s proposed smart and multi-level parking project remained on paper.

According to the town planning department officials of VMC, majority of the roads in the city are below 120 ft width and it has become a herculean task for the VMC to take up road widening works as the building owners are not cooperating with the officials. With this several attempts of the civic body to develop alternative roads in the city have failed. “A survey will be commenced shortly in the city, after convening a meeting with property owners regarding compensation to be paid after demolition of their properties,’’ said VMC town planner Lakshman Rao.

Now we are on Telegram too. Follow us for updates
TAGS
Vijayawada traffic