The Gollapudi-Sitara junction stretch, peppered with potholes of varying sizes, is a death trap for drivers. 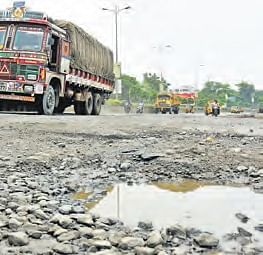 VIJAYAWADA:The Gollapudi-Sitara junction stretch, peppered with potholes of varying sizes, is a death trap for drivers. Even heavy vehicle drivers are afraid to take the road that has seen many accidents, including 20 minor and five major ones in the past one month.

Though temporary repairs works have been taken up, the stretch continues to be dangerous for vehicle drivers.  Some of the small potholes have widened at several places due to rain that is giving a nightmare of sorts especially to two-wheeler drivers. The Vijayawada Municipal Corporation and Roads and Buildings department have invited tenders to make permanent works to repair and cover the potholes.

Last week, Veluru Ashok, a resident of Gollapudi, escaped being hit by a tipper lorry near Gollapudi wholesale market. On his was to office in his car, he saw a big pothole and to manoeuvre it, he took a turn and failed to notice the tipper lorry coming towards him. “I fear what could have happened to me had the lorry hit me,” he said.

After the traffic police diverted all vehicles towards Sitara junction owing to the ongoing Kanaka Durga flyover construction, the busy bypass road became a crucial link for vehicles entering the city and leaving for Hyderabad. A rise in number of vehicles commuting on the stretch has increased the hardships of Bhavanipuram residents. With no traffic signals and speed controllers installed at accident-prone areas, pedestrians and commuters are facing problems while crossing the roads. “The road is so damaged that driving on it is a bad experience,” Jaipal Chowdary, a resident of Bhavanipuram, said.

VMC Commissioner J Nivas told TNIE: “We have received complaints from residents requesting filling of the potholes. Since it comes under the limits of R&B, we have asked them to make temporary repairs to avoid drivers from falling into them. We are waiting for the contractors to take up permanent works.”

Now we are on Telegram too. Follow us for updates
TAGS
Vijayawada Municipal Corporation Gollapudi-Sitara junction road accidents