VIJAYAWADA: Irregularities in sand mining in Krishna and Guntur districts came to the fore in the joint inspections by Central and State pollution control boards. As per the directions of the National Green Tribunal (NGT), which was responding to the petition filed by one Anumolu Gandhi and three others regarding illegal sand mining near the CM’s residence in Undavalli, the AP Pollution Control Board (APPCB) and Central Pollution Control Board (CPCB) had carried out inspections on January 17 and 18, and submitted a report to the tribunal.

As per the report (TNIE has a copy of it), the inspections were carried out at Penumaka, Venkatapalem, Uddandarayunipalem, Lingayapalem and Rayapudi of Guntur district, and Surayapalem, Guntupalli and Ibrahimpatnam in Krishna. All of the places mentioned above are within 15 km distance of the CM’s residence. 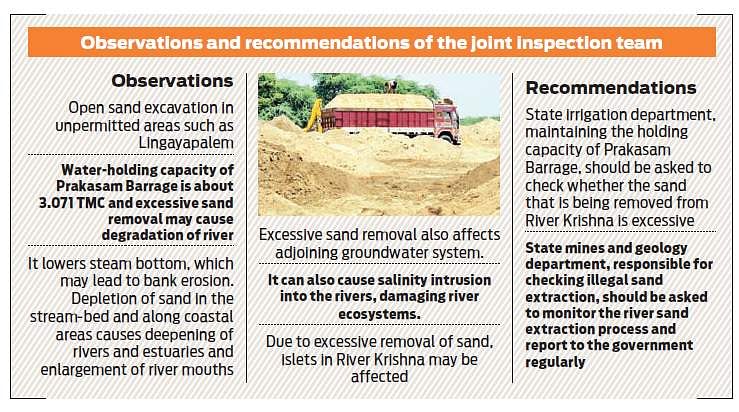 In accordance with the free sand policy of the State government, collectors of both Krishna and Guntur districts had permitted desiltation for extraction of river sand; permission for extraction of a total of 24,55,333 tonnes of sand in Guntur and 9 lakh tonnes in Krishna was granted.

It was found that sand was being dug from a depth of 25 feet; 34,650 tonnes per day was being mechanically extracted and transported in 2,500 trucks and tractors every day throughout the year. During the inspection, the officials discovered that the excavation at the river bank in Lingayapalem was being done without permission; unpaved ramps and narrow roads resulted in dust emissions during movement of vehicles.

At some of the above-mentioned eight locations, ramps were set up adjacent to residential areas and farmlands; loaded trucks were not covered with tarpaulin and moved within the city limits throughout the day, it was found. Interestingly, the entire extraction and supply procedure was being monitored by Blue Frog Mobile Technologies, which was embroiled in the recent controversy of alleged stolen data of citizens in Andhra Pradesh. No record was maintained at three places: Lingayapalem, Penumaka and Ibrahimpatnam (Ferri).

It was observed 11,655 cubic meter of sand was stocked at Penumaka against the rules and mining operations were temporarily stopped as black coloured soil was extracted. Though desilting was permitted in the river, sand was extracted from the bank in a large amount in violation of the set rules. No records were maintained and web-camera was installed. Similarly, no records were maintained at Ibrahimpatnam.

Stay up to date on all the latest Vijayawada news with The New Indian Express App. Download now
TAGS
Pollution Control Board