Annadata Sukhibhava launched, nearly 50 lakh get Rs 1,000 on Day One

Immediately after crediting the money, the beneficiaries will receive an SMS in their mobile phones from the banker and RTGS, officials added.

VIJAYAWADA: The State government on Monday began the process of depositing money in beneficiaries’ accounts under the Annadata Sukhibhava scheme. After verifying the details of the farmers such as bank accounts and Aadhaar numbers, the government deposited Rs 1,000 each in the accounts of the beneficiaries. It will deposit the remaining amount soon.

Earlier, the State government had decided to extend financial support to a tune of Rs 15,000, including Rs 6,000 announced by the Centre, to the farmers having up to five acres of land and Rs 10,000 on its own to those farmers having more than five acres of land and Rs 15,000 to tenant farmers. The government’s plan was to deposit the said amount in two phases —  Rs 4,000 along with the Rs 2,000 to be credited by the Centre before the elections and the remaining 5,000 before Kharif.

Prior to the initiation of the process, Principal Secretary (Agriculture) B Rajasekhar and RTGS chief executive officer Babu A conducted a video conference with all District Collectors on the effective implementation of the scheme.

Immediately after crediting the money, the beneficiaries will receive an SMS in their mobile phones from the banker and RTGS, officials added.

When contacted, Rajasekhar said that the remaining Rs 3,000 will be credited to the accounts of the beneficiaries at the earliest. Meanwhile, the State government issued orders giving administrative sanction for releasing Rs 2,000 crore for the implementation of the Annadata Sukhibhava scheme. 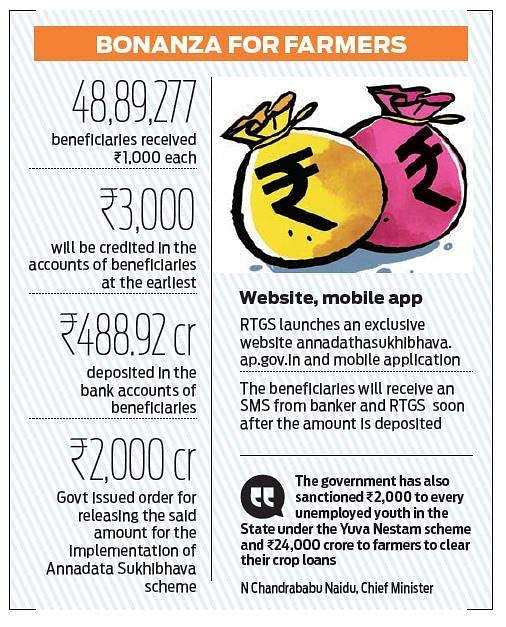 US, China agree to cooperate on climate crisis with urgency

Pakistan reports highest single-day coronavirus spike in 2021 with over 6,000 cases