Jagan Mohan Reddy may turn to I-PAC to implement Navaratnalu

Sources in YSRC told TNIE that Jagan’s team is working on how best to manage the finances without borrowing too much and pushing the State further into a debt-trap.

VIJAYAWADA: YSRC chief YS Jagan Mohan Reddy, who has won an unprecedented mandate in the recent Assembly elections, means business and wants to hit the ground running from the moment he assumes the mantle of chief ministership on May 30. While he has several ideas on overhauling the administration, his top priority would be Navaratnalu – nine welfare schemes – he had promised to implement if voted to power. 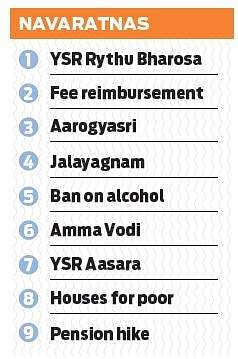 Every beneficiary of the schemes stands to benefit by anything from Rs 1 lakh to Rs 4 lakh per annum. He faces twin challenges in implementing Navaratnalu. One is funding as the outgoing chief minister N Chandrababu Naidu has left the State’s finances in a shambles and two, ensuring the schemes reach every door-step without corruption and political interference.

Sources in YSRC told TNIE that Jagan’s team is working on how best to manage the finances without borrowing too much and pushing the State further into a debt-trap. A comprehensive austerity plan is in the offing to cut wasteful expenditure and prune big projects such as Amaravati. A plea to the Centre to facilitate steady flow of funds -- affected during the Naidu regime due to the strained relations between the TDP and the BJP -- is certain.

But the most revolutionary step in taking Navaratnalu to the people’s door-step is likely to be roping in election strategist Prashant Kishor’s Indian Political Action Committee (I-PAC), which played a key role in Jagan’s electoral victory. “Jagan trusts I-PAC completely as they are hard-working, intelligent and committed young professionals. The idea of involving them to facilitate smooth, transparent and speedy delivery of Navaratnalu is very much on the table,” the sources said.

When contacted, a representative of I-PAC, however, said, “No such discussion has taken place. We might be involved with something but that will be clear in a couple of months.”

It is learnt that Jagan is wary of political interference in the schemes. Janmabhoomi committees, formed by the TDP during its tenure, had wreaked havoc in rural areas by overruling government officials and cherry picking beneficiaries.

It led to resentment among the people and the TDP government was forced to disband the committees but the damage had been done by then. Given this example, Jagan is keen on preventing his partymen from repeating the same mistake, the sources explained.

Similarly, Jagan also seems to have been impressed by Prashant Kishor’s ideas of reforming the administrative apparatus in the country. Prashant is an advocate of the lateral entry of professionals into government service. After the successful 2014 Modi campaign, Prashant had stayed with the PM in the hope that the latter would implement his idea.

But with Modi going slow, he moved on. Interestingly, the Modi government hasn’t dropped the proposal and after much debate, went ahead with it albeit in a small way. Just last month, the UPSC had announced the results of nine lateral hires on contract basis at the level of joint secretary in different departments.

Jagan is wary of political interference in the schemes and is keen on avoiding the mistake committed by Chandrababu Naidu. The TDP’s Janmabhoomi committees had wreaked havoc in rural areas by cherry picking beneficiaries of the various schemes.

Now we are on Telegram too. Follow us for updates
TAGS
Jagan Mohan Reddy Assembly elections