No major change in pollution levels

Visakhapatnam recorded just one day in ‘good’ category in June as against 12 days in May.

VIJAYAWADA: Despite relaxations in lockdown norms, there were no major changes in the air quality in Andhra Pradesh over the last one month. Air Quality Index Monitoring Station (AQIMS) in Visakhapatnam is the only one that recorded less number of days in the ‘good’ category in June than in May, when the State was under total lockdown.

On the contrary, other stations in Vijayawada, Tirumala and Rajamahendravaram had more number of ‘good’ days last month as against in May. As per the data collected by the pollution control board, Vizag recorded just one day in the ‘good’ category in June as against 12 days in May. However, Vijayawada, Tirumala and Rajamahendravaram recorded 28, 26 and 18 ‘good’ days against 13, 14 and 14 days in May. The board officials attributed the low air pollution to the occasional rainfall. 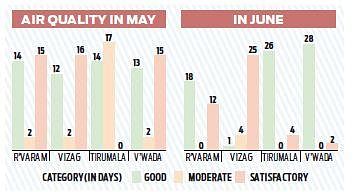 “Intermediate rains and the monsoon have helped to keep the pollution levels down. Water droplets work as suppressant as they trap suspended particulate matter and gaseous pollutants, and dissolve them. Rain also helps in restricting dust from mixing with the atmosphere, bringing down the pollution,” explained BV Prasad, a junior scientist. The other reason for low pollution levels is less commotion on roads.

“We expected more vehicular traffic after relaxations were given in June. Also, public transport has not begun in a full-fledged manner. The number of private vehicles running on roads is still very low,” Prasad added. However, the levels are bound to increase as more offices and businesses resume operations in the second phase of Unlock, he opined.

Now we are on Telegram too. Follow us for updates
TAGS
pollution levels AQIMS lockdown