Lavishing praises on one of the greatest icons of the country, Jagan said words fail to do justice to Dr Ambedkar.

VIJAYAWADA: DR B R Ambedkar, through his life, underscored the significance of English medium education and he was the tallest among the intellectuals of his time, Chief Minister YS Jagan Mohan Reddy said after laying foundation stone via video conference for the construction of a 125-ft high statue of the Father of the Indian Constitution at the Swaraj Maidan here. Lavishing praises on one of the greatest icons of the country, Jagan said words fail to do justice to Dr Ambedkar.

“When we are considering the proposal to install a statue of the great leader, the idea of having it right in the heart of Vijayawada came up. There are seven acres here... if a park comes up, people can enjoy the environment and if we have a statue of Dr Ambedkar in the park, his legacy will be forever remembered. It is with this idea that we are constructing Ambedkar Smrithi Vanam,” Jagan said. At no other place in the country is there a statue of Ambedkar as tall as 125 ft. The CM expressed confidence that the proposed Smrithi Vanam will be a must-see place and inspire people for generations to come.

Later, speaking to his ministerial colleagues and MLAs, he pointed out that Ambedkar’s struggle and will power were exemplary, which made him one of the intellectual giants of his time. The CM directed Social Welfare Minister Viswaroop to develop the park in 20 acres. The government issued orders renaming Swaraj Maidan as Dr B R Ambedkar Swaraj Maidan. The Water Resources Department will transfer the 20 acres under Swaraj Maidan, which is with the Irrigation Department, to the Social Welfare Department. It may be recalled that the previous TDP government also proposed a one-stop recreation centre — City Square — at Swaraj Maidan and even engaged a Chinese firm to prepare a DPR. The then government proposed a theme park, landscaping and a mall at the Maidan.

However, the project had to be shelved after stiff opposition from civil society and people who said the city would lose its only lung space if the ground was used for a mall. As per the GO issued, with the help of the Andhra Pradesh Industrial Infrastructure Corporation, the Social Welfare Department will design and develop the whole area in such a way that all traditional activities being held at Swaraj Maidan now, will continue.

The APIIC will be the executing agency while the social welfare department will be the nodal department. Jagan’s remarks assume significance as the government is all set to introduce English as the medium of instruction in government schools. Invoking Ambedkar in the narrative would bolster the government’s case and strike a chord among the people, notwithstanding legal hurdles or criticism from opposition parties. Besides, the move also may help reinforce Jagan’s avowed commitment to the welfare of SCs, STs, and BCs and further consolidate his support among them, particularly at a time when the TDP is trying hard to paint the YSRC as anti-BCs and regain lost ground. 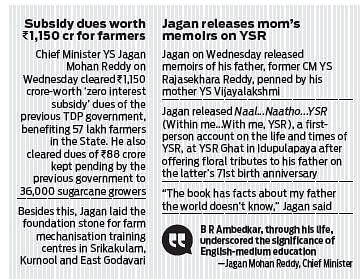 Stay up to date on all the latest Vijayawada news with The New Indian Express App. Download now
TAGS
B R Ambedkar Vijayawada Ambedkar statue