VIJAYAWADA: Launching a campaign against drug abuse, DGP Gautam Sawang launched narcotics helpline no. 7382296118 for both help as well as lodging complaints, in a webinar conducted on Friday at police headquarters on the occasion of International Day against Drug Abuse and Illicit Trafficking.

Later, he announced table tennis player Naina Jaiswal as a brand ambassador for the campaign against drug abuse. He said the campaign theme for the year 2020 is “Better Knowledge for Better Care” wherein the police department will highlight the need to understand drug addiction and how, in turn, better knowledge will foster international cooperation for countering its impact on health, governance and security. 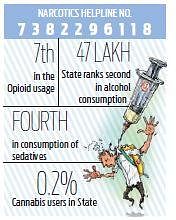 “Not only are they spoiling their career, the youth are getting addicted to drugs and losing lives. We, the CID and the Drugs Department, will pay special attention to drugs, ganja smuggling and other sedatives,” the DGP asserted. In another programme, Commissioner of Police B Sreenivasulu conducted an awareness programme on the impact of drug usage at the City Police Office where students from various colleges participated.

Stay up to date on all the latest Vijayawada news with The New Indian Express App. Download now
TAGS
Drugs International Day against Drug