‘Schooling’ his dreams to life

This TFI fellow chose to teach kids in a Government School in Tamil Nadu over pursuing a Masters degree, netting him an award from IEEE, finds Jasmine Jerald

When you enter the classroom of IV-A at MGR Nagar Corporation School, the first thing you’ll see is a huge chart that says ‘Welcome to the Inventors’ along with another chart which says ‘How are you feeling?’ Before he gets ready to talk to us, he starts fist-bumping his kids. “That’s how we close the day,” smiles Aravindhan Anbazhagan, a 22-year-old Teach for India fellow, who won the Larry K Wilson Award from IEEE for his volunteering activities. He chose to teach in a government school instead of doing a Master’s degree. He adds,”Unless you work in a corporation school, you won’t know what the situation is.” 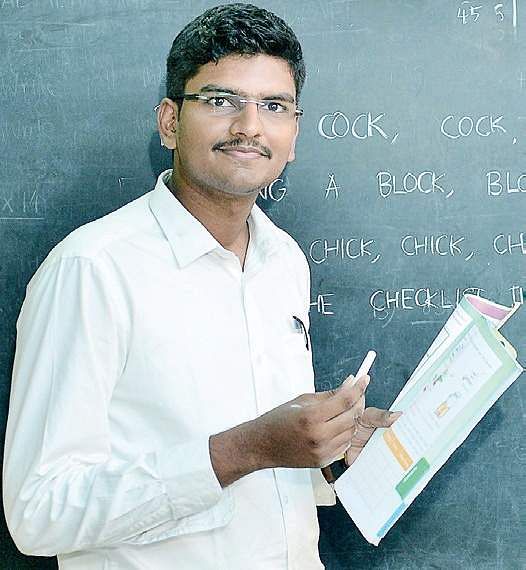 Aravindhan, who’s from a small town called Erundavadi near Kumbakonam, did his elementary education at a government school. He moved to Chennai at the age of 12 when his mother got an opportunity to work here. While he was pursuing his engineering degree, he was introduced to IEEE. “I didn’t want college to be just books. So, I immediately became a member with the guidance of my seniors. We used to organise events to help students pick up presentation skills and communication skills. We as engineers lack that,” says Aravindhan. And now, he has won the Larry K Wilson award from IEEE in the Asia-Pacific region for his volunteering activities.

When asked what pushed him to take up the fellowship, he says it was actually IEEE that inspired him. His mentor at IEEE got him interested in Teach for India (TFI) and the work they do. “I instantly  got hooked. I knew it was the right thing for me to do to see the ground reality. I didn’t want to pursue my Master’s and the take the traditional route,” he explains. And he says everyday something that happens in class makes him feel like he took the right decision. “We had a science fair happening at a neighbouring school and one kid from my class made this beautiful parts-of-the-body model on his own. But he was late so we couldn’t get him to register on time. So I was forced to tell him that he cannot participate and you won’t believe how he reacted.

He didn’t throw a tantrum. He didn’t cry.  He just said  he will look around at the other models this year and that next year he will participate with something better. I was moved. Somehow we convinced the organisers and guess what? He won the first place. I teach them things from the books, they teach me something better than that,” smiles Aravindhan.