Breaking down war and peace

Blessy Mathew Prasad speaks to Nabila Jamshed, who at 28, is an author, a UN analyst and a fervent advocate for peace

Oxford University graduate, TEDx speaker, Goldman Sachs’ Global Leadership Award winner, author, and analyst for the United Nations. All at just 28. Nabila Jamshed is a dreamer, and when she puts her mind to something, she makes sure she gets it done.

Growing up in different cities across India, Nabila didn’t really know what to call home. Her childhood was spent among books — first came Shakespeare and Ayn Rand, and then the history of the World Wars. It’s not a stretch that an interest in wars could have led to a a fascination for diplomacy. “Very early on, I was certain that I would spend a great deal of my adult life fascinated with global social contracts — how we make and break peace, the rise and fall of empires, and how cooperation across borders can reveal more about our common humanity than the artifice of isolationism,” she says. 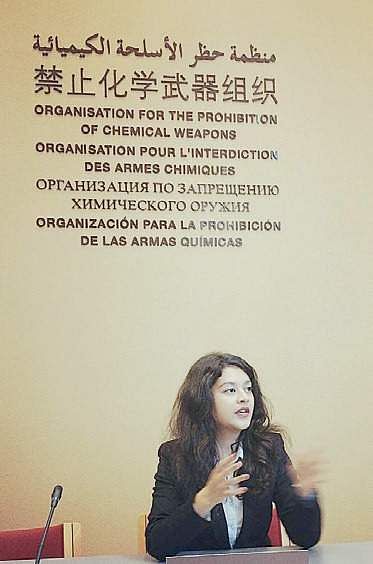 It was her stint at Lady Shri Ram College for Women, New Delhi that was the turning point in her life. Later, she went on to do her master’s at Oxford on Global Governance. “Oxford is a formative experience. It’s an old fashioned academic candy store, abundant with the wealth of ages, and authors, teachers, institutions you’ve only read about, brought to life. I particularly cherish my time with the Oxford Union, which Harold Macmillan called the ‘last bastion of free speech in the Western World’. Confrontations at the Union between student debaters and the world’s leading thinkers, represents what the University of Oxford itself represents — the idea that a great future is built on speaking on equal terms,” she adds.

In 2013, she joined the UN first with the Organisation for the Prohibition of Chemical Weapons during its work on crisis in Syria — a big part of her task there was speech writing. She then joined UNESCO as an analyst, and worked with the peacekeeping mission in South Sudan, when conflict broke out in its capital city earlier this year.

“While in South Sudan, we witnessed endangered peace when conflict erupted. I worked on security and conflict issues with the UN Peacekeeping Mission in Juba, during the ongoing conflict, in which my base was hit by guns and mortar, and we worked under fire,” she recalls those horrific moments, and adds, “This tragic episode in the history of a proud and resilient country was emblematic of how complex the challenge of security can be, and renews one’s resolve to assist in the rebuilding of lives and societies where one can. The challenge of working in that environment is unique and absorbing — peace is a seemingly Sisyphean task, but it demands our constant effort nonetheless.”

Nabila is currently with the United Nations Development Programme (UNDP) in India, and her work touches on the implementation of sustainable development goals, like ending poverty, eliminating hunger, sustainable energy, economic growth, industry, infrastructure, and peace and justice in the next fifteen years.