Riding her bullet to put Jallikattu back on track

Maheswarii Marimuthu, who rode her Bullet across TN to elicit support to lift the ban on Jallikattu, talks to Jasmine Jerald

She was eighteen when her brother used to bring home his friend’s fancy sports bikes. “He never used to let me ride them or even go near them. But that’s what made me want it more,” says 29-year-old Maheswarii Marimuthu, who just finished riding 2000 kilometres across Tamil Nadu on her motorcycle to collect support to lift the ban on the state’s traditional bull-taming sport, Jallikattu. 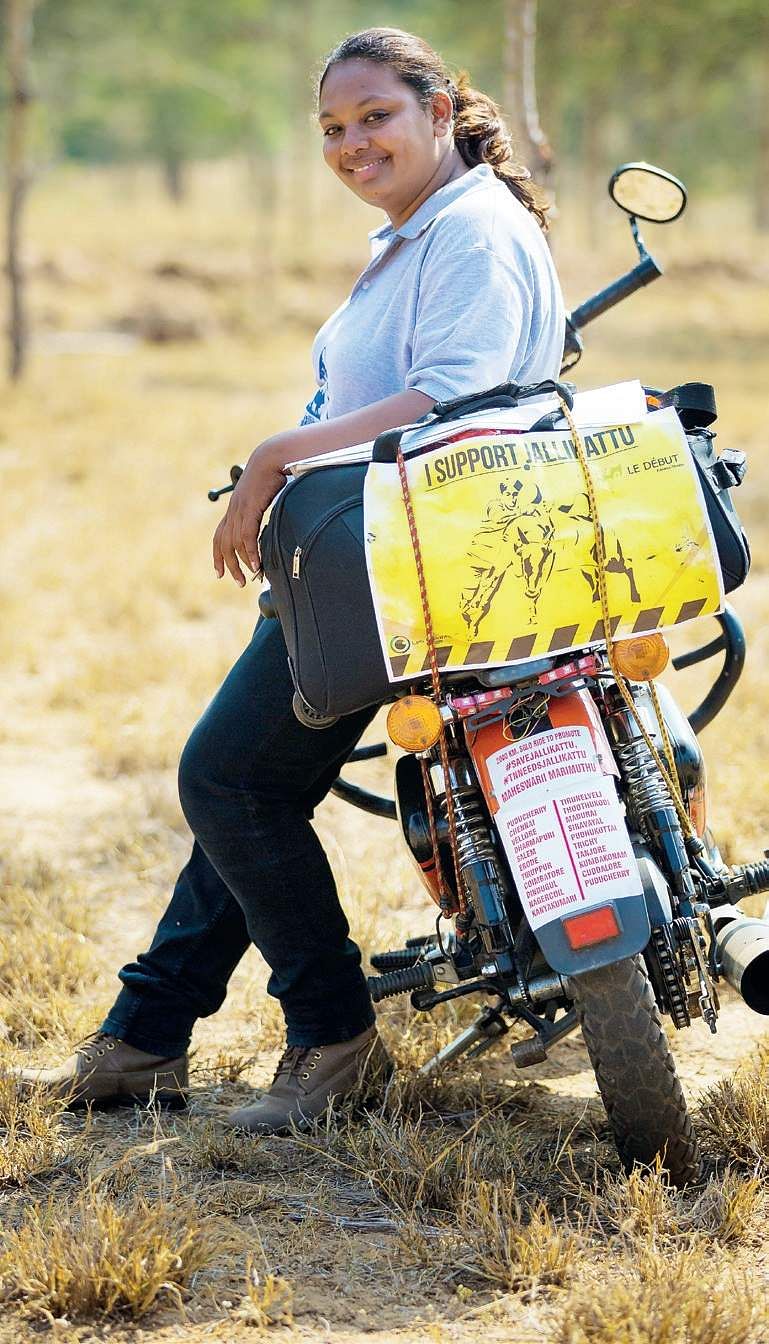 “I was raised to believe that it’s okay to be fiercely independent and unapologetic about your opinions. If people call me strong, it’s because of my father,” smiles Maheswarii. It all began when she started the bikers club, On & Off Roaders, in Puducherry that rides to create awareness on road safety, cancer, helmets etc., on a regular basis. “My grandfather used to raise cows in a small town near Pudukkottai. After my father moved to Puducherry we led a typical city life. I picked up an interest in Jallikattu when I came to know of the ban. Though I have never seen it in real life, I have watched it on television and my father used to tell me stories about the sport. So, I did my research and I was surprised to know that it’s a historic Tamil tradition that’s been carried out for thousands of years. It’s a part of our Tamil culture,” says the MBA graduate. She adds, “Bulls are treated as the pride of the family by these farmers. They spend almost half their earnings to raise them.

The sport has many regulations that ensures the animal is unharmed. Now, if there’s no sport, these farmers find no purpose to raise them. Ten years ago, we used to have a cow-to-bull ratio of 4:1. But now it has fallen to 8:1 and it is going to slip further due to this ban.” That’s why she decided to do her bit and collect signatures across the state from people who realise the need for Jallikattu.

She started her ride on January 2, 2017 from Puducherry and covered Chennai, Vellore, Krishnagiri, Dharmapuri, Salem, Erode, Tirupur, Coimbatore, Madurai, Tirunelveli, Kanyakumari, Thoothukudi, Pudukkottai, Sivagangai, Thanjavur, Kumbakonam and Cuddalore in a span of five days. She was even arrested at Alanganallur for a day but that didn’t deter her from continuing her trip. “I was touched when people from different places offered me food and shelter without my even asking for it,” she says. She finds the support for the sport to be enormous and has collected eight thousand signatures so far which she plans to submit to the state’s chief minister.