Like other medical colleges across India, Hi-Tech in Odisha has put their students in a tough spot, explains Prasanjeet Sarkar

Students of the privately-managed Hi-Tech Medical College and Hospital in Rourkela, Odisha, are staring at a bleak future for no fault of theirs. The 100 medical students of 2015-16 batch of the medical college are on an agitation in Bhubaneswar for over a month protesting cancellation of their admission. 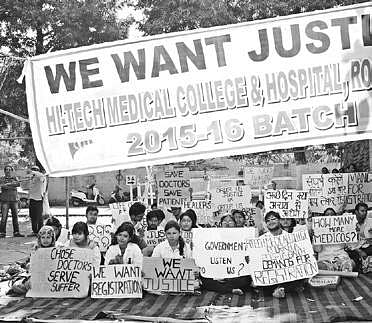 They are suffering due to the ongoing tussle between the Hi-Tech Medical College and Hospital management, Medical Council of India and Government of Odisha. Sources in Hi-Tech Medical College said before admission to the 2015-16 academic session, an MCI team citing infrastructure shortcomings banned the medical college from admitting students. However, the management moved the Orissa High Court with the plea that the shortcomings were removed and the court asked the MCI to allow admission.
By the time MCI granted permission, the counselling process of the Odisha Joint Entrance Examination (OJEE) was over.

However, the management floated advertisements in newspapers for admission and through its own entrance exam, admitted these students in 2015-16 session, which was challenged by the MCI in the Supreme Court (SC) and the Odisha Government also followed suit.
Following Government痴instruction, the Sambalpur University also refused to provide registration numbers to these students and barred them from appearing the university examination.

“Prior to cancellation of our admission, we had already appeared the first and second semester examination but subsequently, the Sambalpur University did not allow us to sit for the first year university examination owing to the conflict between the government and the medical college management. At the end, it is the students who are losing their precious time and money,” said a student Subham Agarwal.
While a review petition filed by the management at the SC is pending, another petition filed by the guardians of the students in the apex court for relief was rejected recently. The students then held a protest inside the Rourkela Government Hospital (RGH) campus to draw attention of the officials concerned.

From the medical college, the agitation has now spilled over to the Capital City of Bhubaneswar with the students hoping for an intervention by the Odisha Government. Last month, the students had resorted to polishing shoes as a mark of protest and subsequently, they took out rallies in the city.
Former Rourkela MLA Pravat Mohapatra has sought intervention of Chief Minister Naveen Patnaik to save the future of the students and take over the medical college & hospital.