Want to be the wolf of chalkstreet?

After watching Leo do his whole psyched-up stockbroker routine in The Wolf of Wall Street, chances are very few finance students want to go there. Turn to the Wolf of ChalkStreet — an online sales and marketing competition for students across the board, and it’s a whole other ballgame. Over 3500 teams have registered so far for the competition and the first phase will begin this week. 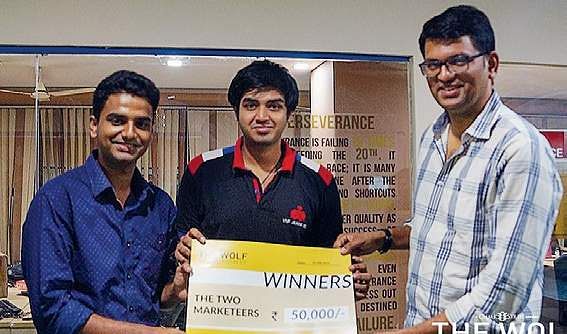 Talking about the competition,  which was curated and conceived by his edutech start-up ChalkStreet, co-founder Rajesh Kumar B says that it was all born from a dearth of good marketing personnel amongst recent grads, “What we found was that most students were just not able to cut it in the real world of intense sales and marketing jobs. We do a lot of online courses and training modules, so to increase the quality of the marketing students we decided to make it a competition instead of a lengthy training programme — and throw it open to students from any stream to see what kind of talent was out there,” he explained.

Essentially, students will be given a company/app to market and they will be graded based on the campaigns and strategies they can evolve. “It’s not just about thinking up new ideas but also about carrying them out and making the product sell, or at least push audience interest in it,” he adds. The best 10 teams will make the cut and will jostle it out on the leaderboard to win the hefty cash prize. What most of them will be eyeing though is the fact that the best 150 performers will be given job offers from India’s most happening start-ups — and we’re talking names like Swiggy, Zivame, Chillr and many, many more exciting companies.
The first edition, held last year, roped in just as many teams and had the SRM University bunch walk away with top honours. Curiously, the teams from Engineering colleges were performing much better at sales tasks than the peeps from B-Schools and even IIMs, explained a rather surprised Rajesh.