On January 10, two persons were arrested in Bhubaneswar for running a fake Bachelor of Education (BEd) institute that offered BEd certifi cates from Kashmir University. Baibhav Gautam from Uttar Pradesh and Rajesh Singh from Bihar ran Kautilya Educational Institute in Bhubaneswar and conned many youth. Five such cases were reported last year alone. Not everything is right with teacher training in Odisha, which has been witnessing a rise in such cases with it being the only state in the country where a ban has been imposed on private teacher training colleges offering a BEd course since 1982. 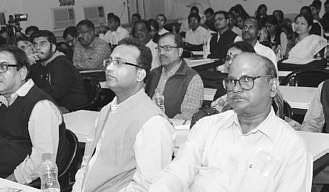 The problem does not end here. The existing BEd and general colleges do not have adequate teachers to train the students. Under the new NCTE Regulation 2014 norms, colleges offering a two-year BEd course with 100 seats need needs to have at least 16 faculty members. Till last year, colleges in Odisha offered a one-year course in BEd and had just eight faculty members. Thus, colleges need to hire over 100 faculty members now. In the Central Teachers Eligibility Test (CTET), only a handful managed to clear both Paper I and Paper II. Clearing Paper I is mandatory for those wishing to teach classes I to V, while, Paper II is for those wishing to teach classes VI to VIII.

Aspirants who wish to get certifi ed for classes I to VIII need to clear both the papers. Students of eight BEd colleges of the state had appeared in the Paper I exam, the highest pass percentage of 57.14 was recorded by Nalini Devi Women’s College of Teacher Education. Of the 14 students who had appeared for the test, only 8 qualified from this college. CTET certifi cation is a must for becoming a teacher in any central government school. It was introduced in 2011 by the HRD Ministry to improve the quality of teaching in schools after the implementation of the Right to Education act. Educationist, SK Dash says the teacher training issues can be addressed if more colleges with adequate faculty members are opened in the state. “Just increasing the number of seats in these colleges or allowing general autonomous colleges to offer integrated BEd or MEd courses will not do any good if these institutions do not have faculty members, who can train them,” he said.