Karnataka polls: Camps reflect a calm that welcomes the storm

Party workers and leaders are on edge, torn between uncertainty and hopefulness, but offices rest in deceptive stillness 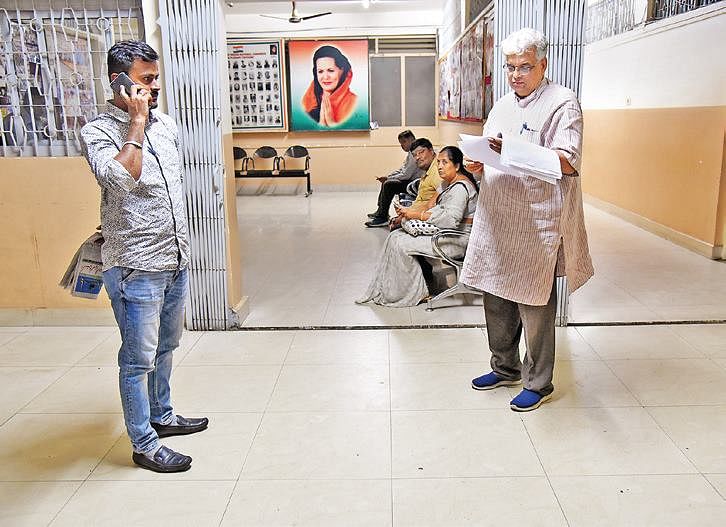 BENGALURU: A day before the State Assembly election results were announced, all the major political party offices in State Capital wore a deserted look. There was calm, before the impending storm, at the offices of Bharatiya Janatha Party (BJP), Karnataka Pradesh Congress Committee and Janatha Dal (Secular). The offices of all the major parties looked deserted with hardly couple of people. There was no buzz of activities with no senior leaders visiting. Since the results are unpredictable, no offices were seen preparing for a celebration.

“We do not know what will happen after the vote count. We have kept crackers, sweets and garlands ready, but do not want to reveal it. In fact, we have not got them to office. We will wait to see the trend by afternoon and then order. Right now, we have turned the preparations to ‘mute’,” said a Congress leader on anonymity. It is the same at JD(S) and BJP offices.

One employee at KPCC Office on Queens Road said that there were hardly three to four persons at the office. “It was quiet on Monday. As polling results start coming in, people will start coming in too, including AICC General secretary and State in-charge K C Venugopal and KPCC Working President Dinesh Gundu Rao,” staff told The New Indian Express.

Mood at BJP office-
Party workers here were on the edge -- some excited, some jubilant and others a little nervous about tomorrow. Lot of leaders including Shobha Karandlaje, Arvind Limbavali, Ashwath Narayana and PC Mohan were at the makeshift office (Rejoice) waiting to welcome B S Yeddyurappa who is scheduled to meet about 150 workers, volunteers and vistaraks who headed teams for campaigning, social media, media coordination and work at booth offices.

A thank-you dinner was arranged for them, to acknowledge their work in the last few months. Many volunteers are still wearing the lotus pin up on their shirts just like Modi has appealed them to. Everybody is confident of a victory tomorrow with no less than 120 seats. Some workers even walked in for the meeting with their children.

B S Yeddyurappa who had been at home all day visited the office at around 5 pm. His personnel said that he spent his time meeting his well wishers, taking phone calls and watching TV. He had initially planned to return to Shikaripura but has now decided to stay back in Bengaluru. B L Santosh has written a thank-you note to all their party workers.

At the headquarters, preparations were on for counting day. This is where party volunteers will gather today. BJP’s office in Malleshwaram too was wearing the same deserted look. “Why should one come a day before polling results? We are going to come with simple majority,” a BJP worker said. According to sources, most of the candidates were in their assembly constituency, and a few were on temple visits. None of the party leaders or candidates had travelled out of the state or country because there were only few days between polling day and counting day, said the sources. There is tension among senior leaders too, but they sound confident about emerging as winners.

In JD(S) camp, workers and leaders were seen relaxing. They were not in office though. “We know victory will be ours. We are coming up with simple majority,” said JD(S) MLC Saravana. “We are getting ladoos from Appaji canteen for our workers and others. We are going to celebrate in a big way. We have already kept crackers ready. The exit polls and other results will not be true.”

Now we are on Telegram too. Follow us for updates
TAGS
Karnataka polls Karnataka counting Siddaramaiah BS Yeddyurappa JD(S)