In an interview on the eve of counting for the Karnataka assembly elections, Parameshwara said his name was doing the rounds even in 2013 and he would take a chance this time too. 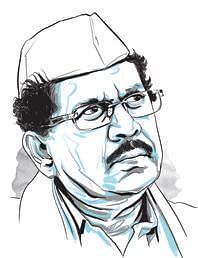 BENGALURU: At a time when discussion on who Karnataka’s next Chief Minister will be is gaining more steam than which party will form the government, Congress state president G Parameshwara has signed himself up for the race. “There are at least half a dozen contenders in the Congress for the CM’s post. Let me also take a chance,” Parameshwara told a news channel on Monday evening.

In an interview on the eve of counting for the Karnataka assembly elections, Parameshwara said his name was doing the rounds even in 2013 and he would take a chance this time too. “There is a system in place to select the chief minister. Had caste been a criterion, a Dalit would have been made CM long ago,” he added. He, however, said the Congress will return with a full majority in the state.

Parameshwara, who unsuccessfully contested from Koratagere in 2013, has gone out of his way to ensure that he is elected from the same seat this time around. Parameshwara, a popular Dalit leader in the Congress, was denied the chance to be CM in 2013 after a humiliating defeat in his home turf.
His supporters had alleged a sabotage by those within the party so he can’t stake a claim for the CM post.
In the light of Parameshwara’s defeat, Siddaramaiah was chosen as the Chief Minister by Congress
MLAs despite Mallikarjun Kharge also being in the race.

Now we are on Telegram too. Follow us for updates
TAGS
G Parameshwara  Karnataka CM Karnataka Congress

Volcanic ash cloud halts flights to and from Spanish island