On Thursday, BS Yeddyurappa was sworn in as Karnataka chief minister for the third time. 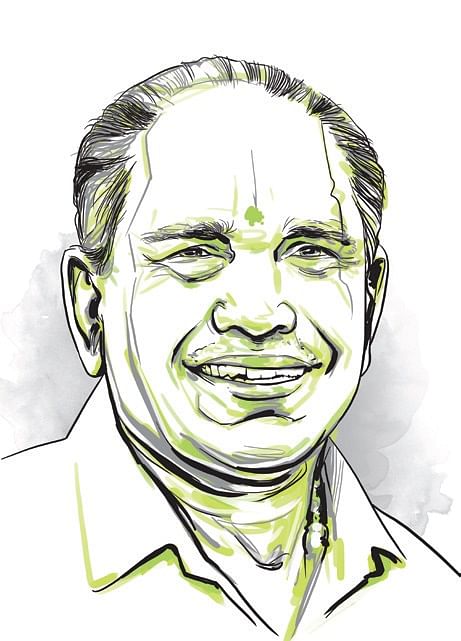 SHIVAMOGGA: Bookanakere Siddalingappa Yeddyurappa (75), who has his roots in Bookanakere of Mandya district but made Shikaripura his home, has always been known to be a 'fighter' and a strong-willed politician who never tires. With the sole aim of bringing the BJP back to power this time, he travelled the length and breadth of the state in a span of about 85 days covering 11,000 km.

On Thursday, BS Yeddyurappa was sworn in as chief minister for the third time. But perhaps, the biggest blot on his name is the ignominy of being the only chief minister of Karnataka who was jailed on corruption charges after the Lokayukta named him in the illegal mining scam.

Yeddyurappa started his political career as a councillor of Shikaripura town municipality. In 1965, he dreamt of building the nation through the Rashtriya Swayamsevak Sangha and made it his life's mission to 'fight for a just cause'. He was elected president of Shikaripura town municipality in 1975. Like most leaders of the Jan Sangh, who went to jail during Emergency, Yeddyurappa too was lodged in the Bellary and Shivamogga jails. In 1980, he became president of the Shikaripura taluk BJP unit and went on to become Shivamogga district president in 1985. In 1988, he became state president of BJP.

When he assumed the office of CM in 2008, he visited villages to understand the needs of the people and made development his mantra. Earlier in his political career, Yeddyurappa fought against bonded labour and in 1981-82, he staged day-night dharna in front of the taluk panchayat office in Shikaripura seeking rehabilitation of rescued bonded labourers. This brought him name and fame across the state. Yeddyurappa took out a 'padayatra' from Shikaripura to Shivamoogga with thousands of rescued bonded labourers forcing the district administration and the government to rehabilitate them. This enabled his maiden victory in the assembly elections held in 1983.

Thereafter, he never looked back. He took up various issues to fight for the rights of the people. He took out a padayatra-cum-day-night dharna seeking title deeds for bagair hukum cultivators. He also fought for maize growers by staging dharna on the premises of the APMC yard.

The Anjanapura reservoir is considered the lifeline of the people of Shikaripura and Yeddyurappa was the main person behind this project. When the reservoir bund was damaged, he got the bureaucrats in Bengaluru to get it repaired in a span of just a few months.

When the government went ahead to acquire the lands of bagair hukum cultivators, Yeddyurappa staged dharna in the assembly and the government succumbed to it and withdrew the bill.

In 1985, when severe drought hit Shikaripura taluk, Yeddyurappa toured the entire taluk on his bicycle and listened to the problems of the people. He demanded the government to waive farmers' loan and took out a yatra from Basavana Bagewadi to Basavakalyan and from Banavasi to Bengaluru.

When the Cauvery issue cropped up in 1998, Yeddyurappa fought for the rights of the farmers. In 2002, when the then government once again thought to evict the bagair hukum cultivators, he took out a padayatra from Shikaripura to Shivamogga and staged overnight dharna. He staged a nine-day-long dharna demanding continuous power supply to irrigation pumpsets of the farmers around Bengaluru.

In 1965, Yediyurappa (he changed the spelling to B S Yeddyurappa in 2007 on the suggestion of an astrologer) was appointed as first division clerk in the Social Welfare Department. He later quit the job and joined as a clerk at Veerabhadra Shastri's Shankar Rice Mill. In 1967, he married Mythradevi, daughter of the rice mill owner. He established a hardware shop in Shivamogga. He has two sons, B Y Raghavendra and B Y Vijayendra, and three daughters, Arunadevi, Padmavathi and Umadevi.

Now we are on Telegram too. Follow us for updates
TAGS
Karnataka BJP Karnataka chief minister BS Yeddyurappa Shikaripura