Fight for Karnataka: Battle only half won for Congress-JD(S) alliance

The real unity of the coalition will be put to test on the day H D Kumaraswamy takes the floor test to prove majority in the house. 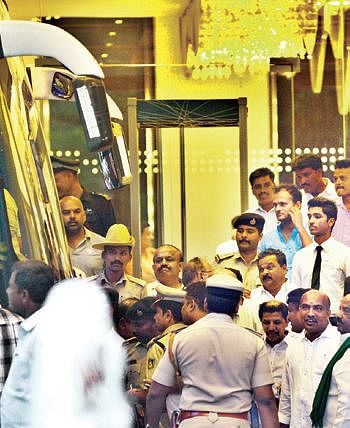 BENGALURU: B S Yeddyurappa’s resignation as Chief Minister may have come as a victory for the Congress-JD(S) combine in Karnataka but the battle is only half won. The real unity of the coalition will be put to test on the day H D Kumaraswamy takes the floor test to prove majority in the house. Unwilling to leave anything to chance, leaders of the Congress and the JD(S) have now decided to keep their MLAs herded together till the day of the floor test.

“Half the battle is won and now we are set for H D Kumaraswamy’s floor test. We are confident of our legislators but what if people abstain from voting? We will be in trouble then,” said a senior Congress leader who was attending a meeting of party legislators on Sunday at a hotel in Bengaluru.

While the Congress and the JD(S) are confident that, since the spotlight is on the BJP, no more tricks will be played to lure legislators. But both parties acknowledge that personal disagreements between legislators can crop up anytime. “Differences are bound to come up in a coalition but we are confident of sailing through smoothly at least till 2020,” said another Congress leader. While the focus is fighting the common enemy for both parties, there is an anticipation of trouble in both camps — an anxiety no one wants to give voice to.

“Taking the matter to the Supreme Court has worked in our favour. The BJP will not make any moves that could embarrass it further but that said, we cannot take things for granted and are treading cautiously even now,” said a senior functionary of the Congress. While the initial plan was to let go of the legislators and ask them to return to a common hotel on Wednesday, the JD(S) and Congress have decided that it is best to maintain the status-quo. Until Kumaraswamy’s floor test, there may be no homecoming for legislators of Congress-JD(S) combine.

Now we are on Telegram too. Follow us for updates
TAGS
Yeddyurappa Kumaraswamy Congress-JD(S)

Spain emerging as one of India’s strong defence partners: Ambassador

DefExpo-22: Dates firmed up, to be held in Gujarat in October