An audiotape released by the Congress as "proof" of BJP leaders attempting to poach its legislator has ended up embarrassing the party. 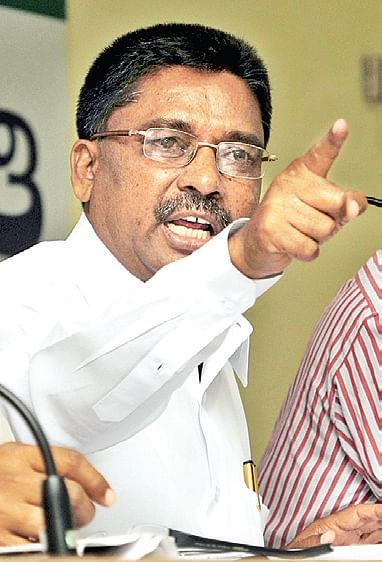 BENGALURU: An audiotape released by the Congress as "proof" of BJP leaders attempting to poach its legislator has ended up embarrassing the party. Congress MLC V S Ugrappa who alleged that BJP's B J Puttaswamy and B S Yeddyurappa's son Vijayendra attempted to poach an MLA on May 17, was forced to declare the audio clip a "sting operation", after the purported MLA in question-Shivaram Hebbar- called the tapes fake.

"I never claimed that the conversation was between Hebbar's wife and BJP leaders. It was a sting operation carried out by a media house with one of their reporters posing as a Congress MLA's wife. BJP leaders made offers to her presuming she was an MLA's wife. We have not manufactured the tape. It is true that BJP made offers," Ugrappa told the media on Monday in an attempt to justify the Congress' allegation against BJP. The Congress has released four audiotapes as evidence of BJP leaders, including Muralidhar Rao, B S Yeddyurappa, Sriramulu and Janardhana Reddy allegedly attempting to lure Congress legislators ahead of the trust vote on Saturday.

While the first three tapes helped the Congress win the perception battle, the fourth tape released by V S Ugrappa allegedly containing a conversation between B Y Vijayendra, B J Puttaswamy and a woman- first introduced by Ugrappa as possibly the wife of a Congress MLA- has boomeranged on the party after Shivaram Hebbar- Congress MLA from Yellapur- took to his social networking pages to dismiss the tapes as fake. "This is neither my wife's voice nor has she received any calls. I condemn the politically motivated people involved in this. This audio tape is fake," said Hebbar's post. His statement coming at a time when the Congress was going to town with the tapes alleging horse-trading by BJP came as a massive embarrassment.

Ugrappa however, defended his statements over the tape and argued that the voices in them were of BJP leaders. The Congress MLC, while refusing to name the source of the tapes citing "life threat" for those involved, has sworn to quit politics if either Puttaswamy or Vijayendra prove that the voice in the tape are not theirs.

Now we are on Telegram too. Follow us for updates
TAGS
BJP Yeddyurappa V S Ugrappa Shivaram Hebbar