The Indian actor also gave him a copy of his critically acclaimed movie "Hey Ram" in digital format.

MUMBAI: Actor-turned-politician Kamal Haasan met acclaimed filmmaker Christopher Nolan, and was surprised that he has seen some of his movies.

The Indian actor also gave him a copy of his critically acclaimed movie "Hey Ram" in digital format.

"Met Mr.Christopher Nolan. Apologised for seeing 'Dunkirk' in the digital format and in return I am sending 'Hey Ram' in digital format for him to see," Kamal tweeted.

"Was surprised to know he had seen 'Paapanaasam'," added the actor, who met Nolan here on Friday.

Nolan continues to shoot a large portion of his films using film. 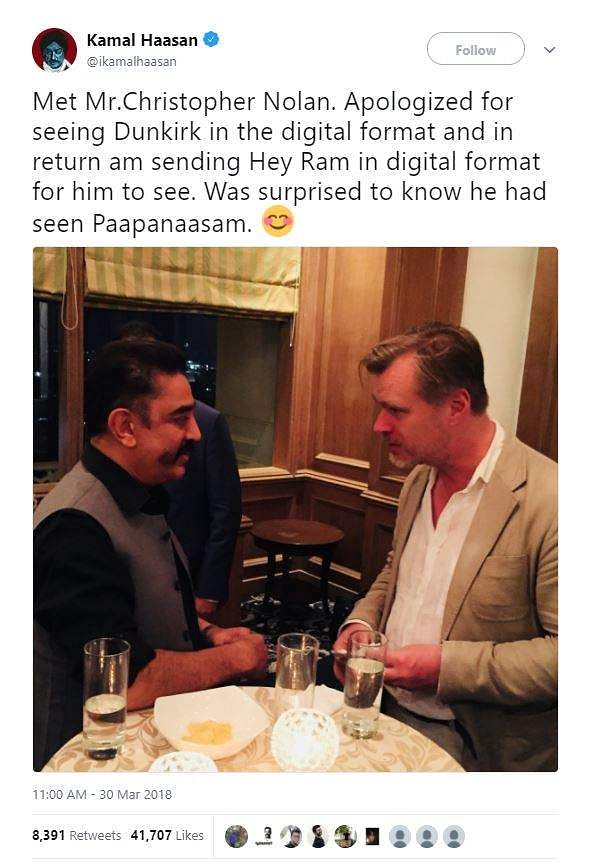 Work and love for cinema has brought him to the country. Nolan is in India to draw attention to the importance of celluloid in the digital age.

Indian filmmaker and archivist Shivendra Singh Dungarpur, founder of the Film Heritage Foundation (FHF), is hosting Nolan at a three-day event 'Reframing the Future of Film' here from March 30 to April 1.

Celebrated visual artist Tacita Dean is also on board to talk about preserving on film, and the necessity of determining new archival and exhibition standards that secure a film's future.

Helping out in this endeavour, Nolan and Dean will be a part of a round table conversation, alongside iconic Indian film personalities like Amitabh Bachchan, Aamir Khan, Kamal Haasan, Shah Rukh Khan, Santosh Sivan, Shyam Benegal, Anurag Kashyap and Farhan Akhtar.

Nolan will also be present for the screenings of two of his recent films - Oscar-nomianted "Dunkirk" and "Interstellar".

The Hollywood director is expected to fly out on April 2.