He’s not just the World’s Greatest Detective and  our favourite superhero of all time, Batman is also the saviour of many a childhood dream, and the ultimate custodian of truth.

He’s not just the World’s Greatest Detective and our favourite superhero of all time, Batman is also the saviour of many a childhood dream, and the ultimate custodian of truth. This Batman Day, we’re convinced, there’s a little bit of Batman in every one of us

This Weekend, the long-familiar and iconic Bat Signal will have been sighted for 80 years, and counting. If you, like us, were wide-eyed fans of the caped crusader, then you too might do well to stay up all night  on the eve of this Saturday, September 21st, to spot that glorious Bat light being  shone across the dark skies of your own Gotham — even if it’s  just for some harmless playacting on the terrace of an apartment complex.

To observe Batman Day, and to mark the Dark Knight’s 80th year as the World’s Greatest Detective, DC and Warner Bros have lined up celebrations across the world. The foremost attraction will, of course, be the lighting up of the night skies with projections of the iconic Bat-Signal. There will also be full-scale fan celebrations in major cities around the world.

Fans in India can follow the lighting up of Batman’s iconic symbol on famous skyscrapers and landmarks around the world, as the event will be covered live on a new interactive Batman Bat-Tracker, launched by DC earlier this month. The Batman Bat-Track er —  available at Batman80.com — will mirror these real-time projections as each city flips on its Bat-Signal.

Pam Lifford, president of Warner Bros Global Brands and Experiences, also presented a lengthy lineup of events to mark the occasion. “We are proud to send up the Bat-Signal on Batman Day, because it is an important beacon of inspiration that makes us all believe that it’s possible to take hardship and turn it into something good.  Batman Day is a global celebration for all the fans,” he added.

The Bat-Signal is scheduled to appear around 8 pm in each of the chosen cities, including Melbourne, Tokyo, Berlin, Paris, Barcelona, London, São Paulo, New York, Montreal, Mexico City and Los Angeles. There will also be Batman runs, marathons and 5K night runs held across the world. DC Publisher Dan DiDio added a few words of inspiration: “Batman’s lack of superpowers roots him in reality,” he said. “He’s an underdog and people find this inspiring, and they see themselves in Batman.”

How To Celebrate Batman Day

Comics for all ages: DC Publishing will be offering free special editions, at select bookstores around the world, of editions like The Batman Who Laughs, Batman: Night-walker, and the Legend of Batman collector's edition.  In select cities, talent appearances and signings by some  of DC’s leading storytellers will also take place.
Batman in the Game: Warner Bros Interactive is expected to release new themed games, while also hosting arena mara thon events online and via select tie-ups. Look out for the new in-game T-shirts on DC Universe Online.

Be Batman: Custom pop-ups will be curated across the US and the world (through Sep 30),  offering limited-edition Batman merchandise. Fans can also gear up with new fashion and sneakers.
Batman gives back: Various clubs will honour kids, teens and youth professionals who stand up for positive change in their communities — like Bat man himself! 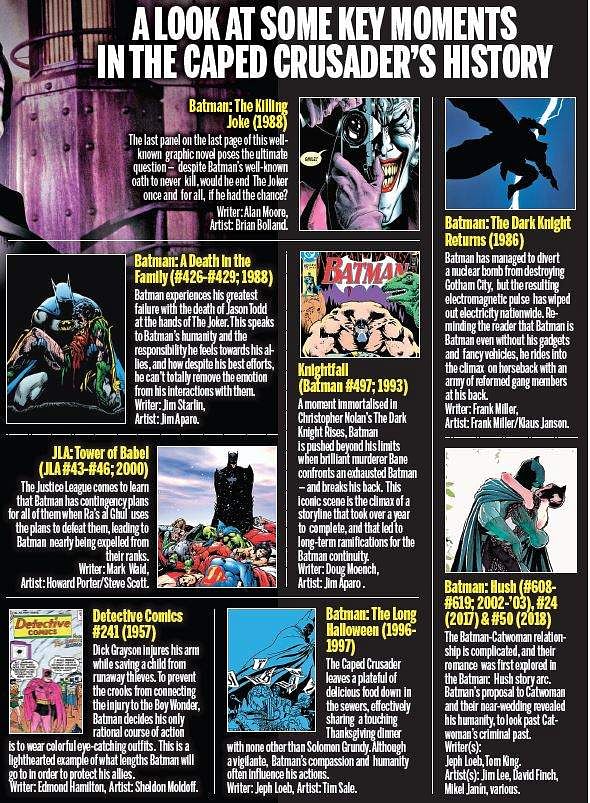 Stay up to date on all the latest Entertainment English news with The New Indian Express App. Download now
TAGS
Batman Batman day