In the caption for the video, Bryan Cranston said his symptoms included 'a slight headache, tightness of chest and (loss of) taste and smell'.

LOS ANGEELS: "Breaking Bad" star Bryan Cranston has revealed that he was diagnosed with coronavirus but has now recovered and donated his plasma.

The actor uploaded a video on Instagram in which he could be seen donning a mask.

Cranston said he had COVID-19 a "little while ago" and considers himself "very lucky" that he only had "mild symptoms".

"I wanted to announce that I had COVID-19 a little while ago. Very lucky, very mild symptoms," Cranston said.

"So I thought maybe there's something I can do, so I started a program (at UCLA Blood and Platelet Center) so hopefully the plasma donation can help some other people," he added.

In the caption for the video, Cranston said his symptoms included "a slight headache, tightness of chest and (loss of) taste and smell". 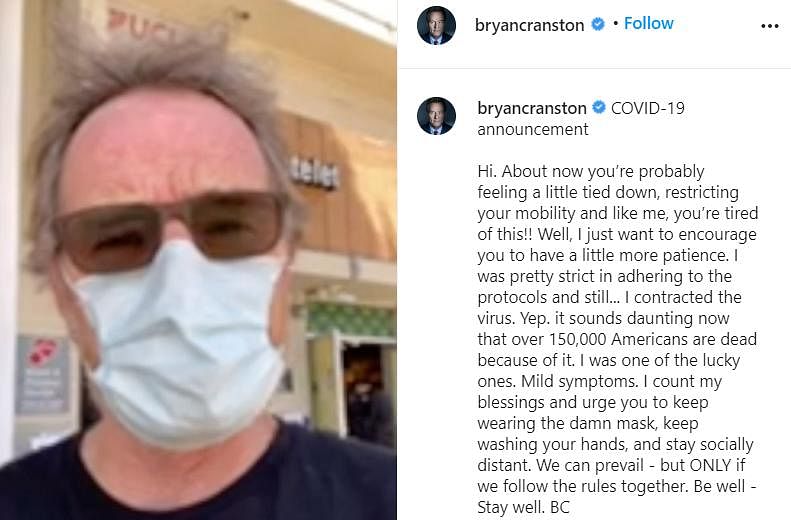 "I was pretty strict in adhering to the protocols and still...I contracted the virus. Yep. It sounds daunting now that over 150,000 Americans are dead because of it," the actor wrote.

"I was one of the lucky ones...I count my blessings and urge you to keep wearing the damn mask, keep washing your hands, and stay socially distant.

We can prevail "but ONLY if we follow the rules together," he added.

The number of confirmed coronavirus cases worldwide has topped 17 million.

According to a tally by Johns Hopkins University, the US leads the count with 4.4 million, followed by 2.6 million in Brazil and 1.5 million in India.