Ms Representation: This weekly column is a rumination on how women are portrayed in cinema.

Representation vs glorification has often been a touchy debate, one that embodied the conversation around the controversial Telugu film, Arjun Reddy. Three years after its release, this film continues to crop up in debates. (There’s a rumoured re-release in 2022 with ‘unreleased footage’ to mark the fifth anniversary of this film.) The problem with Arjun Reddy was how the film glamourised the sexism of its lead. For those wondering how the thin line between romanticization and depiction can be straddled, the FX mini-series, Mrs. America, is a good example.

A fictionalised take on the women’s movement in the 70s, Mrs. America chronicles the battle over ratification of the Equal Rights Amendments Act which guarantees equal opportunities to all citizens.

This feminist story finds an unusual central figure in the anti-feminist, conservative Phyllis Schlafly (played by a terrific Cate Blanchett). Schlafly’s grassroots campaigns galvanised conservative women to political spotlight; the Stop ERA movement proved to be a robust roadblock for the ERA, which was considered bipartisan. Schlafly’s success has farreaching effects in American politics and sadly, the ERA hasn’t been ratified, even today. 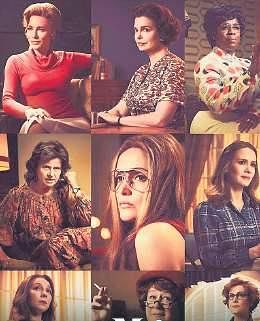 Mrs. America is a rare show that uses an ensemble narrative to its advantage. While spending t i m e w i t h Schlafly, it still populates the narrative with important feminist voices from the era: Gloria Steinem, Betty Friedan, Shirley Chisholm, Bella Abzug, Jill Ruck-elshaus (who get an episode each named after them).

As a master manipulator, Schlafly is gloriously unlikeable. While the series captures Schafly’s appeal to conservative women, it never idolises her.

It never diminishes her intellect either but shows the hate that hides behind those eloquent speeches.

Despite being a politician and a lobbyist, Schlafly ‘championed’ the housewife. And even when sexism slaps her in the face, she puts on a smile, accepts the rules, and plays by them, only to be stalled by the same evils she was backing.

Even for an outsider to politics, Mrs. America makes for a terrific watch, and it is refreshing to see it filled with strong women with conflicting opinions. Most of our onscreen women have no opinions, let alone political ones, unless they play a journalist or a politician. The friction between the women in Mrs.

America is illuminating of the spectrum across womanhood. As said by creator Dahvi Waller in an interview, there are so many ways to be a woman and so many definitions of sisterhood.

Each of the pro-ERA voices fought for a different cause: Abortion rights, political representation... These women let each other down, learnt from their mistakes, and engaged in hard conversations. Would the Cancel Culture have allowed for such a revolution?

The show’s strength lies in its understanding of intersectionality. Despite being feminists, Betty Friedan is disdainful of lesbians; a culture of black tokenism prevails in Ms. Magazine.

On the other hand, the Stop ERA movement has racists and anti-racists, believers of different kinds... However, it is clear where the heart of this show lies.

To quote Flo Kennedy, a black pro-ERA activist, “Lesbians are welcome, horizontal hostility is not.” The sisterhood in Mrs. America rises out of this cacophony of opinions. The common goal is inclusivity. It might seem obvious, but often proves to be elusive in reality. Mrs. America captures this paradox in beautiful, graphic detail. After all, as Steinem asks, “What’s revolutionary about a group of people in a room agreeing with each other?”

Despite being set in the 70s, Mrs. America is painfully relevant to the current political climate. Even today, both women and men tend to look at the word feminism with skepticism as it has been falsely equated with misandry.

As Emma Watson famously said, “If you stand for equality, you are a feminist. I am sorry to tell you that.” This is established with Alice McRae’s journey (an effective Sarah Paulson). McRae brings the ERA to Schlafly’s notice, scared that it would take away the privileges of homemakers and erode the values of the American family.

She comes to the Women’s Convention at Houston to ‘defend’ herself. But she realises that there is no attacker. In an illuminating conversation with a pro-ERA volunteer, McRae realises that there is a lot more in common than what she imagined. Mrs. America not only acknowledges the myopic images associated with feminism but also breaks them down.

When I watch content like Mrs. America, I am acutely reminded of the low standards for women representation we have here. Films are a great medium to reach the masses and yet, our films that documented several social movements have left the women behind in the lurch. How long do we need to be ‘happy’ about a woman character passing the ‘Sexy Lamp Test’? (It’s a test in which you replace the female character with a sexy lamp and see if the story still works...) How long are we going to defend portrayal with, “At least she wasn’t just arm candy”?

Now we are on Telegram too. Follow us for updates
TAGS
Feminism Women in cinema Arjun Reddy