Be it Shanaya or Kaira, Alia’s roles have always left a mark, and in her next — Badrinath Ki Dulhania, she plays a modern desi girl

Alia Bhatt is once again paired with Varun Dhawan in Badrinath Ki Dulhania. The actress talks about her character, the kind of equation she shares with Varun, and her upcoming projects. Are you playing a character contrast to the one in Humpty Sharma Ki Dulhania? Humpty... was a simple story. It was a happy love story. There were no twists and turns in it. My character was an ideal marriageable girl in the film. In Badri... my character has a mind of her own and is ambitious. She doesn’t wish to get married to any random person. She is an intelligent woman. It is a different story. 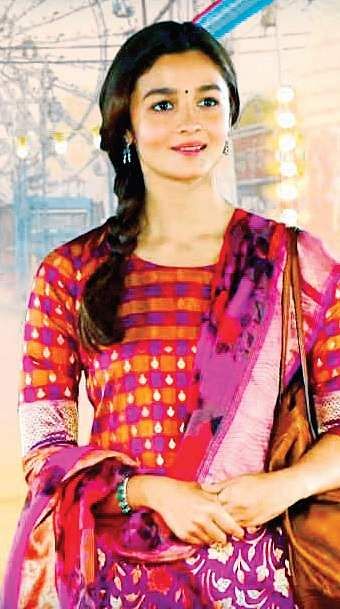 Mine and Varun’s characters are completely opposite to each other, so it takes time for them to get connected. Did you take any inspiration for this role? When I was discussing it with my director, Shashank Khaitan, I asked him if he sees anything in me that is like the character I play. Give me some template for playing Vaidehi. He told me to imagine Kareena Kapoor’s character in 3 Idiots (2009). Though it is not completely like that, but it is similar to the way it was conceived.

How did you work on your look? Vaidehi is a small town girl and we wanted to keep it Indian but you will see her wearing jeans and kurtas. Since since she is from Rajasthan, we have used lot of bright colours. Manish Malhotra made the clothes according to the requirement of the character. Varun Dhawan and you started your acting career together. Has he changed over the years? Varun is hyper, mad with energy. But when he acts, it comes from his heart. He used to get too excited, agitated, now he has calmed down a lot. He has become more secure, more trusting of the director. On the sets he is not only thinking about himself, he looks at the film as a whole. He would think earlier about improvising scenes, now he is connecting one scene to another. His graph as a perfomer has only gone up.

Varun and Shashank make a good combination. Choreographer Saroj Khan had said that you will not match up to Madhuri Dixit in new version of Tamma Tamma song. What is your take on it? I don’t think she is wrong. If she thinks I won’t be able to match up to Madhuri, I don’t think I can either. She is a phenomenal dancer. I think it will be difficult for any actor to match up to her. About Sarojji being upset I don’t see why, it is not like we did it on purpose. Tamma Tamma belongs to her and she is a senior choreographer. When we were shooting a song, we were constantly talking about Sarojji and we retained original steps because we didn’t want to tamper with the choreography. We have retained the original voices too.

Bappi da gave his blessings and with him we re-recorded the song. We went to Madhuri and Sanjay Dutt. It’s not like we didn’t want to reach out to Sarojji, but that didn’t work out. Can you tell us something about Dragon? I cannot confirm anything right now. But if it happens then I would be really thrilled. It will be a dream come true to work with Amitabh Bachchan. You are paired opposite Ranveer Singh in Gully Boys. How is your equation with him? He is absolutely crazy; I have done four commercials with him. He brings in so much energy on the sets, is dedicated and hard working. We have always spoken about how we should work together and now finally it is happening. I am really looking forward to it. What’s the update on Ashiqui 3? It is at the writing stage, and will take some time for everything to take shape. It is not going to happen this year for sure.