Getting all the Shahs together in one place is a task of epic proportions, no doubt, just as the rewards are extremely invigorating, and inspiring.

It takes a fair amount of gumption to call Naseeruddin Shah a reformist. Though we can safely identify the Shahs as the first family of Indian theatre for a simple reason - no other household can claim to be as  unitedly consumed by the art and the arc lamps of the stage.

The go-as-you-please bohemian we related to from his on-screen characters in the 1980s might have wizened a tad, with over four decades of an  incredibly eventful acting career.

But he retains the same manner of conviction we identified with, all those years back, making him the progressive crusader we can’t help but idolise.

In the same breath, the spark stays alive in the family’s youngsters - with Heeba, Imaad and Vivaan.
To be sure, all three of the younger Shahs have their own moments to speak of.

Heeba is expected to perform in celebrated Iranian director Majid Majidi’s upcoming film Beyond the Clouds. While Imaad is working on a full-length album with his electro cabaret-disco-funk outfit Madboy/Mink, apart from working on his directorial debut, The Threepenny Opera, a play by Bertolt Brecht. 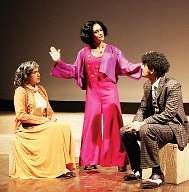 And Vivaan, the youngest of them, stars in Laali ki Shaadi Mein Laddoo Deewana, alongside Akshara Haasan, releasing later this April.

As they prepare to perform together for the first time as one unit this summer, in Riding Madly Off In All Directions, based on stories of the late humourist Stephen Leacock, an epic production by every count, we spoke with the family in a series of email exchanges about their working
dynamics, awkward - and hilarious - moments onstage, and the phenomenon of English theatre in India.

How are things changing, bridging sensibilities between Western and Indian audiences, between the Royal Academy in London and the NCPA in Mumbai?

Naseeruddin Shah: Bridging sensibilities between NCPA and whoever is the least of my concerns. I am interested in getting through to the audiences here. English is as Indian a language as any of the others in our country, and I think its use in our theatre is valid. Motley was initially known as an “English theatre company”, which was disconcerting, because the  only English plays in Mumbai then were either bedroom farces or bad copies of West-End and Broadway stuff, and we were not interested in those. Resultantly, our  ‘experimental’ work then performed to very poor houses. It was only with the realisation that Indian prose writing offered stageable possibilities, and an opportunity to perform in our own language as well, along with the rise in the number of original plays in English by young Indian writers, and the exposure of the imitators, that our viewership began to grow.

English theatre presentation in India is only now beginning to emerge from its Victorian cocoon and sounding like an original voice. With about 50 per cent of the younger generation being weaned on SMS  language and spellings, however, what will happen to the grammar of writing and the literary use of language in the future is a matter of some concern. But what gives us hope is that these new plays in English trying to communicate immediate concerns are in a living, even if - strictly speaking - ungrammatical language.

Has the time arrived for Indian English theatre to come of age?
Heeba Shah: I think we need to get over the feeling that the West is good. We had taken Ismat Aapa ke Naam to a few European countries two years ago, where I also got to watch other plays there and some of them were really faltu (useless). In India, there is a clear demarcation between brilliant plays, good and bad plays. I think we should stop pretending to be English or American, and I am glad that we aren’t doing that. In fact, rural theatre in India is fabulous, and is way above international standards.
Imaad Shah: I think the relevance of Indian theatre in any language will depend, of course, largely on the quality of the plays produced.

There is however the element of ‘building a culture’. So the availability of spaces, the level of interest within the larger audience, converting or drawing newer, relatively uninitiated audiences to the art form, better funding for projects that deserve it, various forms of creative incentives to make  young writers/directors develop original material, a sense of ‘we’re all in this together’ between theatre companies - these are all symbiotic things. They depend on each other to some extent. Government support, like in the West, seems to me to be a distant dream as of now - though there is the National School of Drama. But I also do feel that indigenous and local theatre scenes should be supported and kept alive.

Vivaan Shah: The time will arrive for English Theatre to come of age when people start doing classical English playwrights. The problem with English theatre right now is that people are too preoccupied doing contemporary sitcom type plays. It would have been fine if they were trying to
replicate and reproduce the kind of English we speak in India - which would have been interesting and has a personality of its own. But unfortunately, that is not the case. A lot of the English plays I see nowadays are too inspired  by American and British TV shows, which in my opinion is not a good thing.