With 'Nadigayar Thilagam', 'Sanju' and more, it's the season of biopics

Biopics on actors seem to be in vogue. Hindi cinema has Sanju coming up, while Tamil and Telugu cinema has Mahanati /Nadigayar Thilagam, based on Savitri’s life.

CHENNAI: Biopics on actors seem to be in vogue. Hindi cinema has Sanju coming up, while Tamil and Telugu cinema has Mahanati /Nadigayar Thilagam, based on Savitri’s life. Rajkumar Hirani opts for a direct approach, with Sanju’s teaser ‘talking to the audience’;  Mahanati seems like a tale waiting to unfold. Both teasers were received with unanimous applause and the respective lead actors, Ranbir Kapoor and Keerthy who play Sanjay Dutt and Savitri respectively, seem to have pulled off the impossible —they impersonate, not imitate.

I’ve always been fascinated by biopics, when done well. The foremost film in my list being Gandhi and then, my most favourite Mani Ratnam film, Iruvar. The latter, though not advertised as an official biopic of stalwarts who shaped the Dravidian political landscape (namely Karunanidhi MGR and Jayalalithaa), today almost serves as an essential guide for understanding the events which took place in the State at the time. The film also brought to light a magnificent character in Anandhan, played with much panache and perfection by Mohanlal, whose MGR-impersonation was so real that Anandhan’s struggles and victories hit home. It is a mark of the excellence of an actor when playing another well-known, much-loved icon 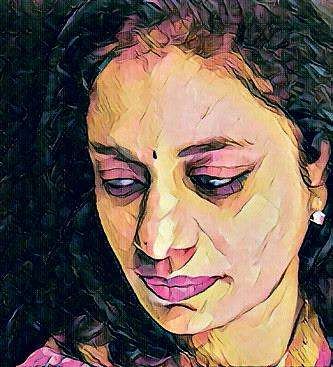 Ranbir’s body language in the Sanju teaser speaks volumes. It’s a terrific make-over which spans Sanjay Dutt’s life—between the ages of 21 to his current 56, and indicates an unpredictable pace of the screenplay, much like of the events in Dutt’s real life. Mahanati is not far behind in getting the period look and casting right—with a fine actor like Dulquer Salmaan portraying Gemini Ganesan’s role in Savithri’s life. The snapshots in the trailer seem relatable as there are many anecdotes which I grew up hearing about this iconic female actor.

The highs and the lows of one of my favourite actors, Savitri, does indeed make for a larger-than-life tale. As a character, Savitri remains one of those rare, eternally loved heroines who could carry off comedy and tragedy with equal ease. A supremely confident actor, she was prodigiously talented and comfortably delivered lengthy sentimental dialogues in Tamil and Telugu, was graceful in song sequences with her beautiful expressions, and in general, brought a certain believability to any film she helmed along with the huge talent bank of heroes of that era.

Savitri matched the histrionics of actors like Sivaji Ganesan in Tamil and Nageshwara Rao in Telugu, with the same finesse with which she matched Gemini Ganesan’s romance in all those family dramas they did together. She was Goddess Parvati (Thiruvilaiyadal), the blind woman who waits on for her army husband (Paarthaal Pasi Theerum), the naive girl who has a child out of wedlock (Kalathur Kannamma), and even the female version of Ghatothkachan to knock the daylights out of everyone (Mayabazar).

Savithri was touted to have worn anklets made of gold, a rare sign of tremendous prosperity in those days, and was talked of as a bold, fearless woman who took the lead in her personal life too, taking the driver’s seat literally (she used to race cars much before car racing was made fashionable here by Ajith Kumar). Her latter days, however, were apparently filled with much angst. It remains to be seen how all this makes for a film on screen. Now that Tamil films are getting released with renewed gusto, I am glad we don’t have to wait too long to find out.