Sui Dhaaga is very special to me; captures the pride of being an Indian: Varun Dhawan 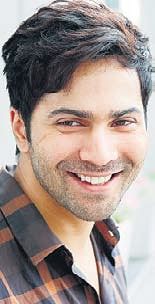 Varun Dhawan and Anushka Sharma launched the trailer of their upcoming film, Sui Dhaaga, in Mumbai, today. Directed by Sharat Katariya and produced by Manish Sharma under Yash Raj Films, the film is inspired by the Make in India campaign. Varun’s character, Mauji, is an unemployed tailor who starts an indigenous textile company. Anushka plays Mamta, an embroiderer and Mauji’s wife and business partner.

“Sharat Katariya is someone who can tell a simple and poignant story in an entertaining manner. Sui Dhaaga celebrates entrepreneurship, love and self-reliance,” said Anushka Sharma at the trailer launch.
“This film is very special to me. It captures the pride of being an Indian. While I was shooting for the film in Chanderi, Bhopal and New Delhi, especially in the village areas, I felt the passion that runs through our country,” Varun Dhawan said.

Describing Sui Dhaaga as a pan-Indian film, Varun added, “When I read the script of Sui Dhaaga, I was bowled over by its power. I love films that tell Indian stories and reach out to the entire population. I didn’t have dates to give for another film, but I still came onboard for Sui Dhaaga.”

“I said 'no' to the film when it was first offered. I did not believe I could play this character. Both Sharat and Manish were extremely convinced, however, so they came to my house and explained their vision to me. I feel very lucky I did this film,” Anushka said.

The music of the Sui Dhaaga is composed by Anu Malik with lyrics by Varun Grover. The film is scheduled for release on September 28, 2018.

Now we are on Telegram too. Follow us for updates
TAGS
Varun Dhawan Sui Dhaaga