The mortal remains of the superstar returns to Mumbai after investigations were completed, following her demise on the night of February 24.

Veteran pan-Indian actress Sridevi's funeral will take place today afternoon in Mumbai, a statement issued by the Kapoor family said. The cremation will take place around 3.30 p.m at Parle Seva Samaj Crematorium and Hindu Cemetery. She had died on February 24.

Her husband Boney and stepson Arjun Kapoor arrived in Mumbai yesterday night via a chartered flight with her body.

Her mortal remains were handed over to her family members today afternoon (IST), following clearance from the Dubai Public Prosecution, which closed the investigation into the circumstances of her death. 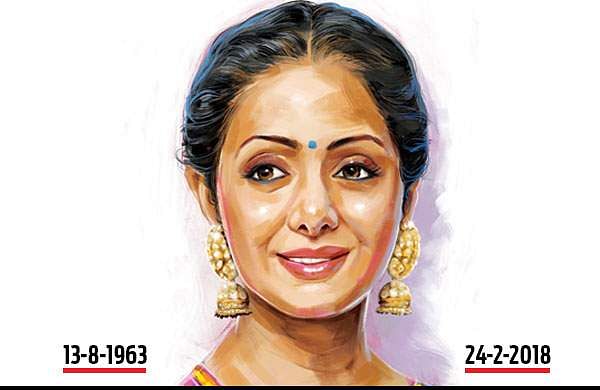 As per Dubai government's forensic report, her occurred due to 'accidental drowning' in a hotel bathtub, following loss of consciousness. The autopsy reportedly also revealed alcohol in her system. Following this, the case was transferred to the Dubai Public Prosecution for investigation.

On February 24 (Saturday) at 7 pm in Dubai, the actress was reportedly found unconscious in her hotel bathroom and was rushed to Rashid Hospital, where she was declared dead. As per standard police investigation procedures, her husband and Bollywood producer-director Boney Kapoor gave his testimony on Sunday (25th) morning. [READ FULL REPORT HERE]

Embalming of #Sridevi's mortal remains has been completed, being taken to Dubai Airport. : UAE media. pic.twitter.com/3UUEimWuAo

Dubai Public Prosecution stressed that all regular procedures followed in such cases have been completed. As per the forensic report, the death of the Indian actress occurred due to accidental drowning following loss of consciousness. The case has now been closed.

Update: Dubai Police has handed over the Consulate and the family members letters for the release of the mortal remains of the Indian cinema icon Sridevi Boney Kapoor so that they can proceed for embalming.

READ | Ram Gopal Verma: Sridevi has pretty much been an unhappy woman

#Sridevi's last dance video with Anil Kapoor from Mohit Marwah's wedding in Dubai..
We grew up watching her..
Cnt express
We will miss you#RIPSridevi pic.twitter.com/vac1CIiwqb

Karan Johar and Manish Malhotra arrive at the residence of Anil Kapoor in Mumbai. #Sridevi pic.twitter.com/LAI6gaaOjY

The unpredictability of life only hits us in times of tragedy ...then soon after we go back to being petulant and full of ourselves....I hope we can take stock of the eventualities of life and death and then rise above our own insecurities....

Many, including Sridevi's brother-in-law Sanjay Kapoor, had shared that the actor was not known to have a history of heart disease. Moreover, she was known to be a fitness freak.

(With Inputs from Agencies and Online Desk)