Ahead of his next release, Sab Kushal Mangal, Akshaye Khanna talks about box-office numbers
and the downsides of being in the public eye

Despite garnering critical acclaim for films such as Border, Dil Chahta Hai, Gandhi My Father, Aakrosh, Mom, The Accidental Prime Minister and Section 375, actor Akshaye Khanna’s work in Bollywood remains few and far between. Up next, the actor will be seen essaying the quirky character of Baba Bhandari in Prachi Manmohan’s Sab Kushal Mangal.

Akshaye is not new to comedy. His tryst with the funny was seen in Mere Baap Pehle Aap, Hungama, Gali Gali Chor Hai. On doing comedy after a hiatus of seven years, he says, “It’s an out-and-out comedy and then a romantic movie. I love doing comedies. It’s a sweet film and I don’t remember the last time I saw such a sweet film”. Star kids Riva Kishan (actor Ravi Kishan’s daughter) and Priyaank Sharma (actor Padmini Kolhapure and film producer Tutu Sharma’s son) will be making their debut in the film. “These kids are fantastic. Whether you’re a  star kid or not, when a person decides to enter the public domain they face tremendous pressure. They are worried, and scared whether they will be accepted by the audiences or not,” says the actor. 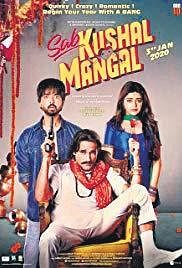 He goes on to talk about how fame affects mental health: “The results are immediate but it can also be very brutal and nasty. Youngsters these days are going into depression just because 10 people have disliked them on social media platforms. Or perhaps 20 friends of theirs may have said this photograph of you is really horrible—such comments lead to depression. You even hear of young kids committing suicide. These youngsters choose to put themselves out there. You are throwing yourself to hatred. No one knows what’s going to come at them once a film is released. I still feel young so I never say ‘In my time’ instead I say when I was starting out there was pressure but not to this extent.”

Akshaye believes that for actors being sensitive is a key criterion. “An actor should never be thick-skinned, at least I am not. I am an extremely sensitive and I don’t like confrontations. I can’t handle them emotionally. I can’t handle praises or criticism. It’s not easy to handle brickbats.”

When asked on how he chooses films, the actor says, “After reaching a certain point in your career, you need to be challenged. I am like a jeweller who has been at his job for the last 25 years. I need to do something complicated to be challenged. My last film Section 375 was one of those films. It had no songs or action but had pure dialogues so it was quite a challenge.” But the actor has his heart set on playing a superhero. “It’s been my childhood fantasy to grow up and do a superhero role. I’m grown up but still haven’t done such a film. Unfortunately, not many superhero films are being made. Hrithik is the only actor who got to play a superhero.”

The 44-year-old goes on to highlight how the success of his current films decides his future choices. “My future film budgets are affected by my past laurels. If my film gets Rs 100 crore, the budget of my next film will be affected. The kind of films I would like to be part of would not come to me if I earned less. They might go to another actor.” Citing the example of actor Ajay Devgn, he says, “Today Ajay is making Tanhaji with a buget of Rs 100 crore but that’s because he has earned it. But nobody will make a Tanhaji with me. Because economics simply won’t work. Tomorrow it may change, but one has to be honest about it. One cannot live in a bubble. If I wish to make a Tanhaji today I have to deliver on the box office.”