We quizzed the choreographer about making the Total Dhamaal ensemble groove and the importance of dance sequences in mainstream Bollywood.

We quizzed the choreographer about making the Total Dhamaal ensemble groove and the importance of dance sequences in mainstream Bollywood. Edited excerpts from an interview...

Tell us about the songs you choreographed for Total Dhamaal. How complicated were the set pieces?
The first song, titled Paisa Paisa, is a remake of the Kishore Kumar classic of the same name, and it has the entire cast of Total Dhamaal. The basic thought is that it’s all about the money and how the characters in the movie dream to be rich. When it came to the dancing, we had to work out a hook step that would be simple, catchy and look nice on all actors. Also, this song has choreographed moments where they are all trying to snatch a bag supposedly filled with money. But the best part of the song was added by Song Director Kookie Gulati, where we designed a special entry for Madhuri ma’am and included a small dance piece for her.

The second song is called Speaker Phat Jaaye. It’s a new song composed by the Gourav-Roshan duo. This song is a pure party number and hence relatively has more choreography. The hook step is really simple and more symbolic. This song was fun and hectic at the same time, as it had no separate set-ups and we had the whole cast and more actors like Esha Gupta, Boman Irani and Vijay Patkar. 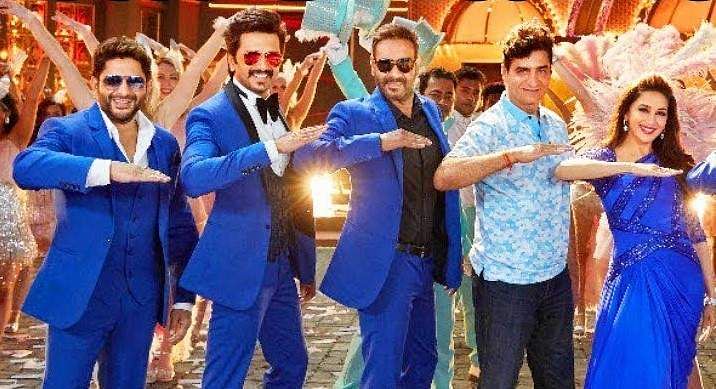 Given the importance of song sequences in Bollywood movies, choreographers are considered a major part of the industry. As an artist and a dancer, how satisfied do you feel working in Bollywood?
It feels amazing how music and dance are an indivisible part of a century-old Bollywood culture. And it feels even greater to be a part of this heritage.

It’s addictively challenging to work as a choreographer than as a dancer. As a dancer you can explore dance moves and concepts that you can physically perform and execute, but as a choreographer you need to calculate and conceive moves and concepts that would suit and look better on someone else, or a on a group of people. As a choreographer, one needs to think of concepts, colours, sets, props and dance of course. So it’s a much wider scope of work. It’s more of a responsible & challenging job and hence more motivating and compelling.

Who was the easiest and who was the toughest actor to train in Total Dhamaal? Madhuri is considered a fantastic performer. How was the experience of working with her?
No one was ever tough, really. Because the steps were comfortable and choreographed as per the actors ease. Also secondly they all are a bunch of super passionate, and enthusiastic, fantastic people who were equally excited being a part of the song as I was and they all rehearsed wholeheartedly. Anil sir added so much energy to the choreography. Riteish Deshmukh looked fantastic and danced like a rockstar. Javed Jaaferi and Arshad Warsi are people any choreographers would dream to work with. Pitobash surprised me with his dancing skills. Sanjay Mishra added so much humor to the choreography. Ajay Sir surprised us on the shoot as he performed every take with so much style and with no mistakes without any prior rehearsal.

Working with Madhuri Ma’am was like a dream come true. On my first meeting with her, she looked nothing different from what I had seen her in the ‘90s. She is a timeless beauty. Choreographing for her is like winning an award in itself. She has looked fab and classic in one song and hip and cool in the other.