MUMBAI: Actor Ranveer Singh, who wooed the audience with his power-packed performances in movies "Padmaavat" and "Simmba" last year, has bagged the Best Actor in a Leading Role award at Zee Cine Awards 2019.

Ranveer was handed over the award here on Tuesday, for his role of Alauddin Khilji in Sanjay Leela Bhansali's "Padmaavat". After receiving it, the 33-year-old said that he was feeling "on top of the world". "Best Actor in a Leading Role! Zee Cine Awards," Ranveer wrote on Instagram along with a photograph of himself with the golden trophy.

Actress Alia Bhatt received the Best Actor (Female) Viewers Choice Award for "Raazi". She dedicated her win to the film's crew and cast.

It takes the best director,writers,crew,hair &makeup to make a Best Actor. Cause you are nothing without your tribe This is for Team Raazi,for @meghnagulzar &for all those those who have given up their lives for us & our country. Thank you for all the love! #ZeeCineAwards2019 pic.twitter.com/csa1CVXPqh

Actor Kartik Aaryan bagged the Best Actor in a comic role (Male) for his movie "Sonu Ke Titu Ki Sweety". Expressing his happiness over the achievement, Kartik posted a few photographs from the gala on social media. In one of the photographs, he can be seen standing along with his parents on stage while accepting the award. For Kartik, sharing a stage with his parents was a "priceless moment". 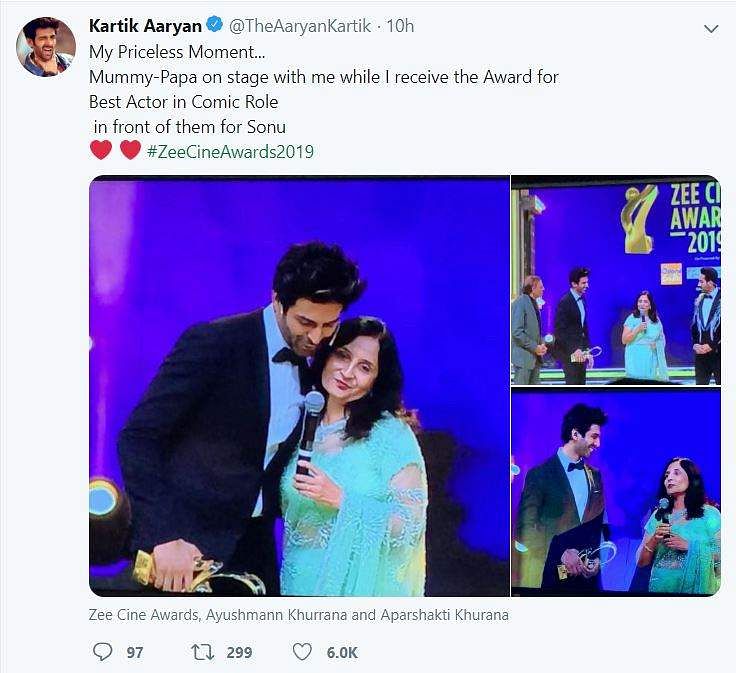 Actress Katrina Kaif received an award for Best Supporting Actress. She was given the award by producer Boney Kapoor. Katrina even shared a glimpse from the award ceremony on her Instagram account. She shared a photograph in which Boney is seen giving her the award.

Actor Vicky Kaushal, who is riding high on the success of the film "Uri: The Surgical Strike", won Best Supporting Actor (Male) for his role of Kamli in "Sanju". Actress Sonam Kapoor Ahuja was honoured with Extraordinary Icon for Social Change. She posted a few Instagram stories of herself with the trophy. The gala was hosted by Kartik and Vicky. Several celebrities such as Hema Malini, Deepika Padukone, Alia, Ranbir Kapoor, Janhvi Kapoor and Kriti Sanon marked their presence at the award ceremony.