Richa Chadha has started a new parody series on Instagram, where she appears as a kooky and euphoric news reporter called Quarantina, who shares weird news from all over the world.

Richa Chadha has started a new parody series on Instagram, where she appears as a kooky and euphoric news reporter called Quarantina, who shares weird news from all over the world.“In the first week of the lockdown, I myself was getting depressed looking at the death toll of this lethal virus and those that are suffering because of the lockdown,” Richa said. “It was giving me anxiety. So I decided to do something about it.” 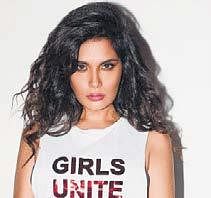 She also recently also introduced an angry reporter from North India, called Tina Singh, who goes off-script in the middle of the sketch. While Richa has been seen in comic parts in films like Fukrey, she explored her off- screen funny self in ‘One Mic Stand’ last year, where she wrote and performed a standup for a live audience.

Her new series parodies the information overload caused by the coronavirus pandemic. “While my donations for the underprivileged are ongoing, I wanted to create something that would make people smile,” Richa shared.

“I am not making fun of the disease and its impact, simply trying to highlight that even in these conditions, sometimes there’s bizarre news that can make you chuckle despite yourself.” On the film front, Richa was last seen in Ashwiny Iyer Tiwari’s Panga. Her upcoming releases are the Shakeela biopic and Madam Chief Minister.

Now we are on Telegram too. Follow us for updates
TAGS
Richa Chadha