Through his career spanning over 30 years in Hindi films, Khan has established himself as one of the most popular and influential actors of Indian cinema.

MUMBAI: Bollywood superstar Aamir Khan turned 56 on Sunday and received a plethora of warm wishes from the film industry on the occasion.

Through his career spanning over 30 years in Hindi films, Khan has established himself as one of the most popular and influential actors of Indian cinema.

The legendary actor with 5 Filmfare awards, 2 IIFA, 4 National film awards under his belt has always entertained the audiences with his enthralling acting performances that are still looked up to by the whole film industry.

In addition, Khan has received honorary accolades, including the Government of India's Padma Shri in 2003 and Padma Bhushan in 2010, and an Honorary Doctorate by the Maulana Azad National Urdu University (MANUU) for his distinguished contributions to the Indian cinema and entertainment industry.

To celebrate the 56th birthday of the 'Lagaan' actor, Bollywood took to social media and poured in birthday wishes for the legendary actor.

Kareena Kapoor who will be soon sharing the same screen space with Khan in their upcoming comedy-drama 'Lal Singh Chaddha' took to her Instagram and shared a candid picture of the birthday boy in which he is seen sporting the look of the character.

She captioned the post as, "Happy birthday my Lal... There will never be another like you..Can't wait for people to see the magic you have done in this diamond of a film @_aamirkhan"

To wish her 'PK' co-star, Anushka Sharma posted a solo picture of Khan on her Instagram story and alongside the picture, she wrote, "Happy birthday Aamir! Wishing you a wonderful one @_aamirkhan," using a shining star emoticon. 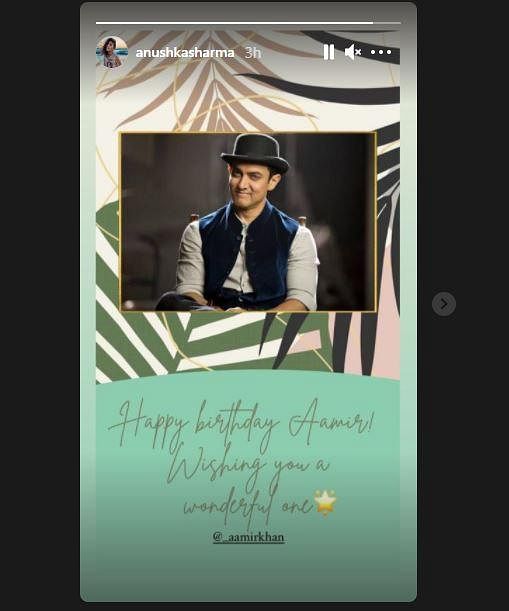 Addressing him as his inspiration, Varun Dhawan shared a collage of two throwback selfie pictures on his Instagram story and wrote, "Happy birthday @_aamirkhan. Thank you for inspiring an entire generation."

Many other stars including Sidharth Malhotra, Sonakshi Sinha, and others celebrated the '3 Idiots' actor's birthday by sharing posts, pictures on social media.

As an adult, his first feature film role was in the experimental film Holi (1984). He began a full-time acting career with a leading role in Qayamat Se Qayamat Tak (1988).

His performance in Raakh earned him a National Film Award in the Special Mention category. He established himself as a leading actor in Hindi cinema in the 1990s by appearing in a number of commercially successful films, including Dil, Raja Hindustani--for which he won his first Filmfare Award for Best Actor--and Sarfarosh.

In 1999, he founded Aamir Khan Productions, whose first film, Lagaan (2001), was nominated for the Academy Award for Best Foreign Language Film, and earned him a National Film Award for Best Popular Film and two more Filmfare Awards (Best Actor and Best Film).

Now we are on Telegram too. Follow us for updates
TAGS
Aamir Khan Aamir Khan birthday