Running positive is an inspirational docufilm on two regular boys

It explores the lives of two kids  Babu and Manik,  who were born HIV positive and are now regular marathoners.

Jacob Varghese, best known for his films such as Savari Series and Puneeth Rajkumar Prithvi, is now back with his next. Chamal. Produced by Jacob himself, stars Sathish Ninasam, Sonu Gowda and Roger Narayan and is currently at being shot. 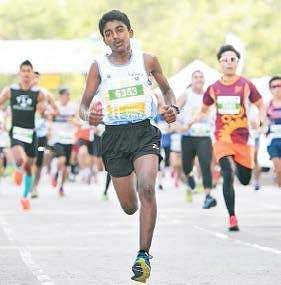 The director has stepped away from his regular feature-film genre and has tried his hands at a documentary, which he has been  working on for the last four years. With an interesting title Running Positive, the documentary explores the lives of two kids - Babu and Manik from Bengaluru, living at Snehagram. They are 14 to 15 years old, and were born HIV positive.  Both now run 10 km marathons across the world and Jacob has travelled with them to eight countries.

“I have gone with them to the Children Olympics in Netherlands, UN Headquarters in Geneva and Rome, among other places,” says the director, who didn’t have anything particular in mind, when he started this.

“I understood the depth of the story when I returned and edited the film for 8 months. I realised, the story had a bigger potential. So when I started on  the second part, I went to Phuket Marathon, Colombo and Gold Coast marathon in Australia and Sydney,” says Jacob.

The filmmaking is in the final stages, with the music set by Grammy winner Ricky Kej. “It was kind and gracious of Ricky Kej to come on board,” says Jacob, who plans to complete the documentary and hit the festival rounds latest by May end or June. “I will be travelling to Boston for the final marathon,” he adds.

Jacob, who felt their story is so inspiring that it needs to be told to the world. “As a filmmaker, we always think of entertainent and commercial business, which is fine.  Along with that, you must invest time in such films... I will be happy if the audience takes back something home. Both the kids have been  trained under Elvis Joseph and they clocking less than 39 minutes at the marathons, which is a very good time,” he says.

“The children inspired me and I didn’t bring anything sorrowful into the documentary movie, instead I focussed on the inspirational,” he says.

The filmmaker had started on the project, intending for it to be a break, but it eventually became a project. “Since it is a story on regular boys, I thought it was best to bring out a one-hour documentary. They have not acted, I simply followed their lives,” says Jacob. “It is interesting how the two took up sports and running to overcome their circumstances.”

According to Jacob, Babu is also an inspirational speaker and he is now a voice against discrimination and stigma attached to HIV affected people all around the world.

Running Positive will be screened at film festivals in North America and will see a theatrical release in Los Angeles and New York.

Jacob, who has helmed this documentary also steps in as a producer. “I didn’t want anything to be in the way of my vision, so I decided to invest in it.”