The actress has shown interest and is keen to work with Vijayaprasad, the director who has been looking for a heroine who has no qualms about gaining weight

Offlate, Sharmiela Mandre has been uncompromising in her choice of films, and her forthcoming projects are proof of this. In her latest, she is the answer to director Vijayaprasad’s long search for a heroine who is willing to gain many kilos for a movie.

The actress, who has been patiently waiting to see how her first B-Town project Katha will be received in theatres, is equally curious to find out the response to her another movie Aake. The Indo-British thriller, directed by KM Chaitanya, has her paired opposite Chiranjeevi Sarja. Sharmila is also doing a special song for Mass Leader, for which the shooting is currently on.
But what is truly out-of-the-box is the actress’ next: Vijayaprasad’s 34 34 - Ladies Tailor, with comes with a unique tag line
-Galabe ellada putta premakathe. Our source says that the actress expressed interest after listening to the story, and the movie’s director Vijayaprasad and its producers Sudhir and Sanath are happy to have her on board as well. The only question now is if the actress is willing to putt on the ‘many kilos’ required for this role.

Vijayaprasad in his earlier interview with City Express had said that he was looking for a heroine who is willing to gain weight upto 120 kilos because that is central to the telling of the story. Will Sharmiela take the risk or bend the rules? Or will she have the director breaking the rule he has set for his film? We will know in a week’s time. 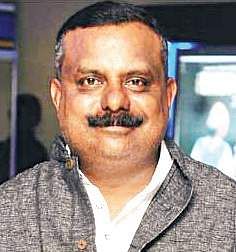 The film’s team had tried to approach actresses such as Huma Qureshi and Vidya Balan, and there was news of Kannada heroine Nikila Rao of Srinivas Kalyana fame coming on board. But looks like they  have finally decided on Sharmiela.
If all goes well, the actress will be working with the director whose has been appreciated for films like Sidlingu and Neerdose.
Vijayaprasad has roped in Ravi Shankar Gowda to play the lead in 34 34 - Ladies Tailor and will have Suman Ranganathan playing a pivotal role in it. This is third time Suman will be working with the director.
34 34 - Ladies Tailor made under Yogaraj Bhat movies, has music by Anoop Seelin and cinematography by Sugnaan.