The Villain sets have gone with the wind

Storm dust and strong winds caused havoc on the sets of Prem’s forthcoming film, The Villain. Having completed the shots with Mithun Chakraborty, the director had been shooting scenes with Sudeep in Belagavi in a hot afternoon with temperatures running to 42 degrees. And just when the team was doing their last scene, they had to  ‘pack up’ for the day when waves of strong winds hit the shooting spot, taking with it the entire set. 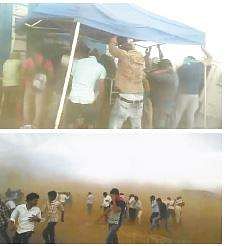 While Prem had installed special effect fans on the sets to generate wind for a few scenes, and at the end of the day, it so happened that the actual gutsy wind blew over the entire set.  “The wind picked up speed and nearly blew us away. Sudeep and I were holding on to each other for  support and we were surrounded by 10 people protecting us. Apart from fans, we have a crew of 300 members at the sets and everyone had difficulty in breathing.” The director feels lucky that there were no causalities.

But the entire set made for the The Villain has “gone with the wind”, he says. “I am not in any frame of mind to estimate the loss. I am glad that everyone who were on the sets and who had come to watch the shoot are safe. Even the crowd, which had gathered in thousands, to watch the shoot through the day had little bruises because of the strong wind.”Prem now has decided to keep this clip in the movie. “I want people to know the natural

calamity one faces during shooting and it is just god’s grace that we didn’t see any major accident,” he says.Apparently, Mithun Chakraborty who is part of the project had left the previous day. Prem, who had an opportunity to shoot the actor for the first, says, “I want to salute the actor because, even at this age, he enjoys doing his own stunts and did it wearing a rope. He says that it is his job... it only proves his professionalism. I was happy to hear from him that he likes my work and is ready to give me more dates.”
The filmmakers will be heading to London after Belagavi, where Shivarajkumar and Amy Jackson will join the team.

'Bhajarangi 2 has been made on a big scale', says excited Shivarajkumar

Mayuraa Raghavendra’s 'Kannad Gothilla' to be dubbed and released in Tamil, Telugu, Malayalam and Hindi

I will come back with another Rangitaranga: Director Anup Bhandari

The script is what got me in: Ragini Chandran on choosing 'Law'