The comedy film is about a Kannada lecturer, Janardhana (with a receding hairline), who embarks on a journey of self-acceptance. “Ondu M otteya Kathe was my fourth script, as the producers didn’t like the earlier ones. I was passionate about films since childhood, and decided to venture into short films and quit as a radio DJ,’’ says Raj. 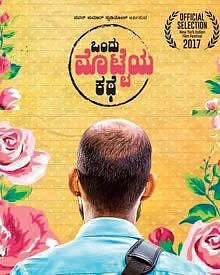 The director’s earlier short films include the 3.5-minute long Summe Namagyake and the 20-minute Five Letters. When Raj began doing the groundwork for Ondu M otteya Kathe as a short film, producer Suhan Prasad realised its potential and invested `30 lakh to make a full-length feature film. On making the movie in Kannada with a Mangaluru slang, Raj says the script decided the language. “Emotions are more important than cinema language,’’ says Raj, who plays a flawed hero. But Raj wasn’t the first choice to play Janardhan in Ondu M otteya Kathe.

“Five of 248 actors who auditioned were shortlisted to play the lead role. But Suhan and others felt only I could do justice to the role. The audition process had helped me mentally prepare for it. I am very unlike Janardhan, who’s an introvert with feelings of inferiority. I begun wearing janivaara (sacred thread) before the start of shooting to get under the skin of the character,” says Raj.

As the crew were first generation actors and technicians, a two-month-long workshop was conducted to hone their skills. The bonding helped in wrapping up the shooting in just 16 days. Music was scored by Midhun Mukundan. The film initially was set for local release in Udupi and Dakshina Kannada districts, but Pawan Kumar Studios and Mango Pickle Entertainment agreed to distribute it.