Shanvi’s Indianised in the western world

While Darshan’s get-up in Tarak as a football player was much loved. Now the recently released look of Shanvi Srivastava from the filmmakers gives us an insight into her character.  Shanvi had tweeted: “My fav pic from #tarak ! It just so perfectly describes my character in the movie:)”. 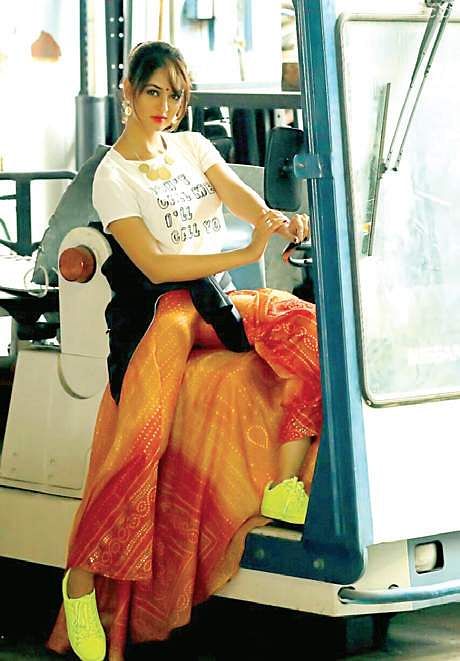 Though the team will reveal details about her role in Tarak, in the coming days, City Express attempts a guessing game from these visuals. Shanvi, who plays an NRI in the film, is seen as a desi girl in a western country, which may indicate that her character has deep fondness for all things Indian.

The actress has retained an Indian look, with the highlight being the bindi and bandini skirt that have been teamed with a  white top with a western cut, a black jacket and neon shoes. And it definitely makes for an interesting look.

We were told that her outfit was put together by Tashwini Prakash, and it looks original and provokes an interest in the role Shanvi is to essay in Tarak. The film directed by Prakash Jayaram aims for a month-end release on Vijayadashmi, and is now in post-production stage.

Tarak also has Sruthi Hariharan in the lead and has music by Arjun Janya and cinematography by AV Krishna Kumar.

Now we are on Telegram too. Follow us for updates
TAGS
Darshan Tarak Shanvi Srivastava