From blockbusters like KGF to low budget sleeper hits Sa.Hi. Pra Shaale: Koduge Ramanna Rai we take a look at the best of Kannada cinema in 2018.

Another year comes to an end, and it’s time again for us examine how the Kannada film industry has fared. The year started with a remake, Brihaspathi, and ends with a romcom in Ananthu v/s Nusrath, which brings the total released films this year to 230 films — which is definitely on the higher side for the industry.

Cream of the crop

One of the year’s biggest hits has turned out to be a recent release. KGF, starring Yash and directed by Prashanth Neel, chronicles the life of its protagonist, Rocky, across thirty years, and is set in the backdrop of the Kolar Gold Fields. Aside from Yash’s show-stopping performance, highlights of KGF include cinematography by Bhuvan Gowda, art by Shivakumar and music by Ravi Basrur.

While KGF had great buzz preceding its release, an unlikely blockbuster this year came in the form of Sa.Hi. Pra Shaale: Koduge Ramanna Rai, directed by Rishab Shetty and produced under his home banner. The film, set in Kasargod, sensitively portrays the issues faced by a school near the border and details the language struggles faced by young students.

The director was inspired by a real-life incident that took place in 2007, which is relevant even today. With a cast comprising primarily of children, a highlight of the film was Anant Nag’s performance. Another major hit of the year was Tagaru, directed by Suri, who had earlier helmed films like Duniya, Anna Bond, Jackie, Kaddipudi and Kendasampige.

The hard-hitting A-certified film saw Shivarajkumar playing a cop and Dhananjay, in a breakout performance, portraying a new-age villain. Tagaru, which also stars Manvitha Harish, Bhavana and Vasishta Simha, was noted for several of its elements including characterisation, screenplay, cinematography, background score and stunts.

A year of firsts

With Kannada films facing stiff competition at the box office from other language films, which are getting increasing number of screens — and the industry fighting against the dubbing of these films — KGF made history by becoming the first Kannada film to get a simultaneous release in five languages. The film is made in two parts, and KGF Chapter 1 got a pan-India release on December 21.

The makers of Avane Srimannarayana, Muniratna Kurukshetra, Pailwaan and Udhgarsha are all now planning for multilingual releases of their respective films. KGF also made history by becoming the first Kannada film to join the 100-crore club. The film, which collected more than 100 crore in its 7 days, is still going strong. The film has also become the all-time no. 1 Kannada grosser in the US.

The year also marked the first collaboration of two superstars in Kannada industry, Shivarajkumar and Sudeep, who came together for Prem’s directorial, The Villain. The CR Manohar-production also marked the Kannada debut of Amy Jackson.

The re-release of classic, Nagarahavu (1972), was another first for the industry. The Vishnuvardhan-starrer, directed by Puttanna Kanagal, was re-released in a cinemascope 7.1 format by Eshwari Production.

With OTT services increasing their clout, several Kannada films joined the library of Amazon Prime Video as well as other digital platforms like Netflix and Hotstar, which are all looking to expand their regional selection. Currently, the new Kannada films up streaming on Prime video are Humble Politician Nogaraj, Katheyondu Shuruvagide and Sankashta Kara Ganapathi. OTT platforms are also said to be in talks with big filmmakers for rights to their work.

New directors in the rise

The year saw several debutant directors making a mark, starting with Saad Khan, who made his debut with Humble Politician Nogarj. We then had Janardhan Chikkana, who made Gultoo. Rishika Sharma, granddaughter of ace director, GV Iyer, helmed a film titled Trunk. S Mahesh Kumar, a protégé of Yogaraj Bhat, made a smashing debut with the blockbuster, Aygogya.

Gurudatha Ganiga, who became one of the youngest directors in the Kannada industry, had the privilege of helming the last film starring the late Ambareesh, Ambi Ning Vayassaytho. 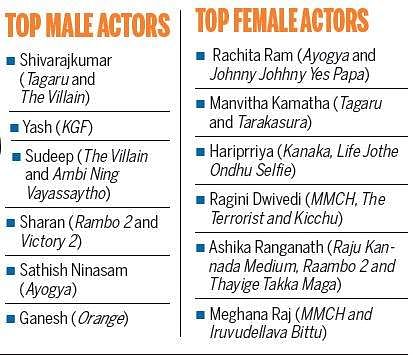 The year also had its share of films that created much hype before release, but failed to live up to the promise. Rajaratha, Kanaka, Prema Baraha, Preetham Gubbi’s Johnny Johnny Yes Papa, Bacckaaasura, Bhairava Geetha and Thayige Takka Maga can all be said to fall under this category.

The MeToo movement, which started abroad and made its way to India, had an impact in the Kannada film industry too. While actor Sangeetha Bhat kicked off the movement here, it was Sruthi Hariharan’s allegations against south Indian actor Arjun Sarja which made headlines at the national level.

The case went up to the Karnataka Film Chamber of Commerce, and some senior actors from the industry, including Ambareesh, tried to solve the issue to no avail. The matter is now at the court. Actors Shraddha Srinath, Samyuktha Hegde, Neethu and Avantika Shetty expressed their support for Sruthi on social media.

Emphasis on strong women and remakes

Despite the large number of releases, some stars failed to have any films coming out this year. The list of actors who did not have a release in 2018 includes Darshan, Puneeth Rajkumar, Sriimurali, Dhruva Sarja, Rakshit Shetty and Upendra.

While Darshan completed shooting for his 50th film, Muniratna Kurukshetra early in January, the film, which is to be released in 2D and 3D, is still stuck in post-production. The actor has also completed shooting for Yajamana, and is currently on the sets of Odeya, with all films expected to get a release next year. Puneeth Rajkumar only worked on a film, Natasaarvabhouma, which is slated for release in 2019.

Sriimurali, who has lined up a couple of films, is busy shooting for Chetan Kumar’s Bharaate. Upendra, who took a break from films to focus on politics, returned to cinema, and has completed shooting for Home Minister and I Love You. Rakshit Shetty’s next after Kirik Party will be Avane Srimannarayana, which is being filmed. Dhruva Sarja had signed Pogaru, but the Nanda Kishore-directorial did not go on floors in 2018.