Since it is the monsoon season, three-fourth of the day would go by waiting for the rains, and we shot the scenes when we would get natural light.

Rain did play spoilsport for the Salaga team, but that did not perturb them from completing the pending song shoot for the film,” says Sanjana Anand, who was excited to get back to shooting. The film marks the directorial debut of actor Duniya Vijay, who also plays the lead role in the film. “Maleye Maleye is a melody, which needed outdoor locations. It was canned in the Malnad region. 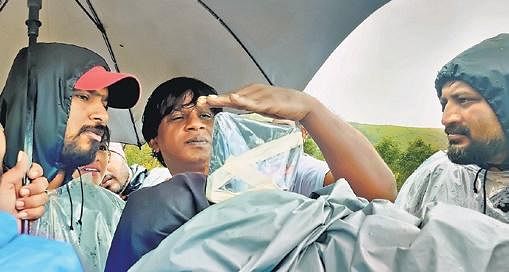 Since it is the monsoon season, three-fourth of the day would go by waiting for the rains, and we shot the scenes when we would get natural light. The team has managed to get the best sequences for the song,” says Sanjana. The track, Maleye Maleye, sung by Sanjith Hegde and Aishwarya Rangarajan has been composed by Naveen Sajju. Musician Charan Raj has composed the background score. The film is being produced by KP Srikanth also features Dhananjay in a prominent role. Sanjana, who has completed the shooting and dubbing for Salaga, is looking forward to the film’s release.

The actor, who came to limelight with Chemistry of Cariappa, also has in her kitty, Shokiwaala, which is ready for release. It is directed by Jokky and has her paired opposite Ajay Rao. This apart, she is paired opposite the late actor Chiranjeevi Sarja in Kshatriya. Meanwhile, the actor is gearing up to start shooting for her next project, Addhuri Lover. The film, bankrolled by director AP Arjun, will star Kiss hero Virat in the lead role.

Now we are on Telegram too. Follow us for updates
TAGS
Sanjana Anand Maleye Maleye