The film has music by ‘Maestro’ Ilaiyaraaja and the legendary composer’s dedication and commitment to work surprised Sujana.

On the occasion of actor Shriya Saran’s 38th birthday, the first look poster of her upcoming pan-Indian film, Gamanam, has been released by director Krish. Touted to be an urban social drama, the film will be released in five languages — Telugu, Tamil, Malayalam, Kannada and Hindi. The poster shows Shriya in an intense and deglamourised saree avatar. 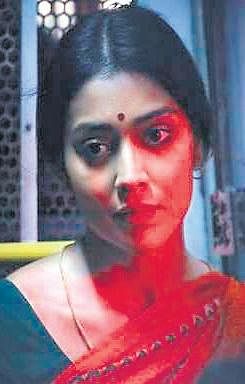 “The film is an anthology of interconnected stories based on real-life incidents. All the characters and stories are relatable. In a way, Shriya’s character has different shades and she has carried it off so well. Every time I see the visuals, her performance blows me away,” says Sujana Rao, the director of Gamanam.

The film has music by ‘Maestro’ Ilaiyaraaja and the legendary composer’s dedication and commitment to work surprised Sujana. “We wrapped up the shooting last year, but had to put the post-production work on hold due to the Covid-19 pandemic.

The re-recording was still pending. I thought it was going to be a near-washout year, but Ilaiyaraaja sir’s passion for cinema has helped us complete everything on time. He connected through video calls and worked day and night for about 45 days to complete the re-recording of our film in the fastest way possible,” reveals Sujana. Also starring Nithya Menen, Shiva Kandukuri and Priyanka Jawalkar in important roles, Gamanam has dialogues by Sai Madhav Burra. The film was shot predominantly in Visakhapatnam and Hyderabad.

More from Entertainment Kannada.
Now we are on Telegram too. Follow us for updates
TAGS
Shriya Saran Gamanam

'Window Seat' first-look to be unveiled on September 24