Ahead of Roberrt release, CE caught up with the Challenging Star, and got hold of some interesting details about the film, and his journey

Darshan fans have already created a festive atmosphere surrounding Roberrt, which is aimed for a simultaneous theatrical release in Kannada and Telugu  on March 11. An emotional Darshan calls his fans as the real celebrities, and it is for them that the 53-film-old actor wants to create a benchmark with each film. This time around, he is coming up with Tharun Kishore Sudhir’s Roberrt, produced by Umapathy Films, which has already made business and is running in profits.

However, Darshan would prefer to wait for the release to gauge the actual parameter of success the audience reaction. “Yes, I am aware of the business prospects of the film, and how the producer has recovered the money. However, the result of a film is known only with the audience feedback. From March 11, I hope my celebrities enjoy watching me on the silver screen,” says Darshan, whose film is creating a good buzz in Telugu too. Ahead of the release, we caught up with the Challenging Star for a conversation.

‘I have managed to look like the character and not Darshan’
The first appealing factor of Roberrt was the various looks of Darshan from the film. From his Hanuman avatar to his leather jacket-sporting look, Darshan credits his director for envisioning the character in such a way,  “Everybody knows how I look, and I didn’t want to show the same me again. Tharun wished that I looked like a biker for my role, and taking a leaf out of Western countries, we too designed to character to sport a long hairdo and have tattoos,” says the actor, adding, “When the team shows so much interest, it pushes me to share my inputs too.

Since I am also a biker, I carry a certain style while I ride, and I shared the same with the director and cinematographer Sudhakar S Raj, and finally, the best look was zeroed in on. We have also worked on a special walking style for Roberrt,” says Darshan. The actor shares that 80 per cent of the film was made on sets, and a lot of creativity went in to set everything up. “Loads of bikes, jeeps, cars were part of Roberrt’s journey, and each time when the vehicles were brought down from containers, its was impressive to watch those huge gadgets being transported. Even the stunts of Roberrt is filled with classy and crispy fights that will be enjoyed by all.”

‘I’m particular about the dialogues I deliver’
Not just the look but Darshan’s dialogues in both the trailers and teasers have gone viral. “I don’t like talking much, and I hate to deliver over-the-top dialogues. My words should not pull somebody’s leg, nor scold anybody and mostly it should not hurt anybody. I discussed these elements with the dialogue writer K L Rajashekar. Since I don’t watch all the films that are released, I won’t be aware of the kind of dialogues written in other films. So the responsibility is with the dialogue writer to write fresh dialogues, which also stays true to the character,” says Darshan.

‘My reel life is different from my real life’
Darshan is often seen playing the messiah in his films, and the trend seems to be continuing with Roberrt too. Does this align with his off-screen persona too? “My real life is different then my reel life, and both are not the same. What I do there, I will not adhere to it in my life. In my opinion, directors too aren’t exactly happy about writing their roles around an actor’s off-screen personality,” says Darshan citing an example of one of the dialogues in Roberrt. “There is a line “Hey! Thukalli..Ninnu Mass Adre...Naan Aa Massge..Boss in the trailer, which I felt was overboard. But then, Tharun explained the situation, and made me understand that the following line will justify that dialogue, and more importantly, people will realise it is Roberrt who is saying it and not Darshan,” he says.

‘Even if I can change 100 people’s lives through my films, I will be happy’
Does Darshan believe that message films actually create an impact on the audience? “Films are certainly made for entertainment, but it is nice to have an underlying social message too,” asserts Darshan, who gives an example of his previous film, Yajamana. “I don’t say that my films will change the lives of crores of people, but I will be happy even if 100 people take away something from the film. Even though all my films are meant to be mass entertainers, there will always be a morality angle to the proceedings,” he says. 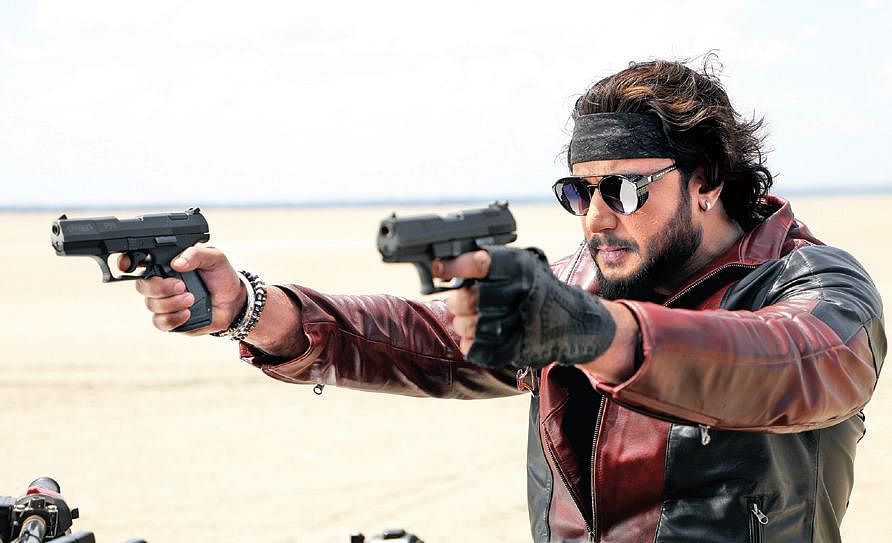 ‘Tharun Kishore Sudhir has clarity and is always open to suggestions’
Director Tharun and Darshan have been long-time friends, and the latter is working with the one-film-old director for the first time in Roberrt. It just took a cameo in Tharun’s debut film, Chowka, for Darshan to be convinced of the filmmaker’s capabilities.  “The way he gave an introduction to the Robert character in Chowka, I saw a lot of clarity. I like how he gets into minute details. On the other side, in my observation, he had the habit of taking too many shots and scenes, which would go waste in the edit, and that is something he has corrected with his second film. He shot what was needed and planned, and was completely open to suggestions,” says Darshan, adding, “I usually suggest directors to focus on this during scripting. The producer’s investment starts at the time when the director camps at a certain place for 6 months to write a script. It is not right to write so much, and waste the scenes after it is shot. Time is money, and let us not waste it. It also takes away my energy as well as the team. And when we don’t see a scene that is shot with a lot of effort, we feel bad.”

‘Filmmaking gets upgrades, but it’s not applicable for an actor’
With his experience, what are the kind of checkboxes he ticks before okaying a script. “I am thankful that it is through acting that I earn my living. From Majestic to Roberrt, my motto has been to entertain the audience. I rely on the learnings of my journey so far to choose my scripts. Further, I want the audience to seek out my films, and bring families to theatres,” says the actor, adding that  his experience at Ninasam theatre comes in handy even today. “Today, you see an upgrade on mobile, cars, lifestyle, and even in the kind of filmmaking. However, it does not apply to an actor. What was learned 20 years ago comes to use even today.  There is no upgrade to acting. It depends on the situation and inputs we take. Dance, fights can vary from film to film. Emotions remain intact.”

‘Miss the film hoardings at T Junction’
Today making a film is easier when compared to getting it to the theatres. “It is definitely a challenge. We can’t put up posters now. I even miss the huge billboards at T-Junction near Majestic. This was the only place with a traffic jam then, and it would help people to be aware of the films coming out in theatres. Nowadays, reaching out to that last person about our film has become difficult. Of course, social media has taken over, and that’s the platform currently much in use to promote a product,” says Darshan, adding, “Today, when a producer approaches me, promotions is one important point in the list that will be discussed,” he says.

‘Ego’ not acceptable at work
Is it easy for a star of his calibre to go for retakes? “Of course. When a shot is filmed, I also look at the reaction of a light boy, and his expression to the scene becomes important to me. There are times when I gather inputs from them. A few get scared, but still tell me their opinions, and if it is fair, I would be ready to go for one more shot. You can’t bring in your ego at the workplace. Of course, there are people who want to establish themselves as directors, and keep telling ‘One more’. When I understand that the reason for a filmmaker to ask retakes is for their personal ego boost, I ask them to enact what it is that they want me to perform. I am ready to do exactly what is needed, but I always need a specific reason for that ‘one more’

‘Once an actor, always an actor’
Despite having the skill-set to move into other aspects of filmmaking, Darshan always wants
to remain an actor. “Wearing multiple hats in a film might dilute the core passion of being what you want. Taking too many responsibilities will distance me from acting, which is what brought me to the industry in the first place. I believe it is better to row one boat.”

Now we are on Telegram too. Follow us for updates
TAGS
Darshan