I have not experimented hugely with Roberrt: Tharun Kishore Sudhir

The release of a Darshan-starring film is nothing short of a festival, and director Tharun Kishore Sudhir has enough reasons to celebrate for his Roberrt. The film is opening to houseful boards on March 11, as the tickets have been sold out before the release. Produced by Umapathy Films, Roberrt will be out in 656 theatres and 100 multiplexes with over 2,786 shows in Karnataka alone.

The movie is also coming out in Telugu in at least 433 theatres in Andhra Pradesh and 409 halls in Telangana. It will also be shown in Tamil Nadu, Kerala, Maharashtra and Delhi. Ahead of the big day, Tharun tells CE, “This is the moment that proves the saying, ‘There is always light at the end of darkness’. The pandemic had put us in darkness for almost a year, which is also coming to an end, and life is getting better. From the entertainment point of view, I call this a positive light.” 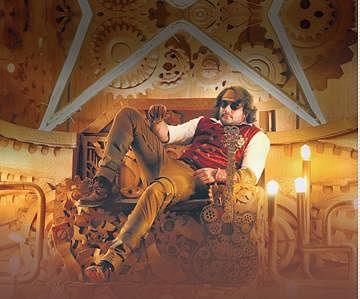 Ask the the two-film old director about the most difficult part of helming a big starrer, and he replies, “Darshan as a star would have done everything in his 50-plus movies, and bringing out content that doesn’t match his previous films is a challenge. However, I have tried my best to bring in some newness with the scenes and the on-screen attitude. Darshan is a professional actor and respects his technicians. But bringing something different on the table for a star is very tough. As an actor, he would already set a benchmark, so we aim to think beyond that.”

Tharun was involved in the production aspect of movies for a long time, and took his time to take up directing, making the foray only after he learnt the finer points of working as a creative head, and working behind the scenes. “Be it with films like Adhyaksha, Ranna or Gajakesari, I got good opportunities to explore my skills. When I got the confidence that I can take the responsibilities, that’s when I took up direction with Chowka, and now with Roberrt,” he says.

Tharun was twice lucky with both the films, who managed to get associated with the Challenging Star in Chowka as well as Roberrt. Does he feel that half the job is done by bringing in an actor of a big stature in a film? Tharun agrees, saying that with a star, half the platform is set. “All you need is a little effort on this base, and you will get a good leap, and that will be like icing on the cake,” he says. “When it comes to a newcomer, it starts with zero, be it the story or any other aspect, and it is tough to reach people without enough publicity. When you have a star, all you need to concentrate on is good content,” he says.

As a director, according to Tharun, the first impression comes right at the writing stage, and an audience it gradually gets difficult to judge the project as technicalities start coming into the picture. “That initial excitement and thought I had while writing Roberrt has not been missed, and remains intact in the final product,” he explains.

So does Roberrt follow a tried and tested commercial formula? “Yes, the pattern is tried and tested, but it’s said in a new way, especially for actor Darshan,” says Tharun, adding, “Today, we use the same mobile each time, but features and software keeps getting upgraded.” From what little has been revealed about the character played by Darshan, who will be seen in two shades in Roberrt, the storyline hints at a calm guy with a violent past. However, the team has been keeping it a secret.

“It is always good to maintain suspense about the character, and questions like ‘what’ and ‘why’ attract people,” Tharun asserts. Tharun and Darshan have been good friends, and over the years, the bonding has only got stronger. So what was it about the Challenging Star that made him cast Darshan in the film? “His aura, and his screen presence come out very special. When you design a character for Darshan and bring him into the frame, it only enhances with the scenes and takes the film to the next level,” says Tharun. Talking about the  high points of the film, he says, “It is a proper high voltage commercial film, blended with family drama and emotions. It is two-and-a-half hours of packed entertainment. I will not say that I have experimented hugely here.”

Now we are on Telegram too. Follow us for updates
TAGS
Tharun Kishore Sudhir Darshan Roberrt