Nanda Kishore to direct Shivarajkumar in a Kannada-Telugu bilingual

Director Nanda Kishore’s meetings with Hattrick hero Shivarajkumar a couple of times had led to speculations about the duo teaming up for a project.

Director Nanda Kishore’s meetings with Hattrick hero Shivarajkumar a couple of times had led to speculations about the duo teaming up for a project. According to reliable source, the director of films like Adhyaksha, Ranna, Mukunda Murari and Pogaru, will, in fact, be joining hands with the Century Star. 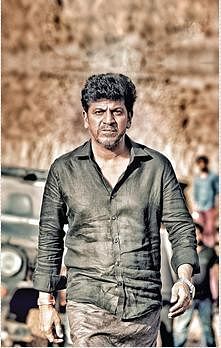 The bilingual film will be made in Kannada and Telugu. An official announcement of the project will be made on April 24, which is late Dr Rajkumar’s birthday. This is yet another first-time combination of the actor-director, which is going to be a big-budget film.

It will be bankrolled by Melodrama Studios. The film’s story, written by Priyadarshini Ram, will be made with a star cast, and will be produced by Gautam Reddy, Kirthi Chilukuri, and Vivek Reddy. Shivanna is looking forward to the release of Bhajarangi 2, directed by A Harsha, which is slated for May 14.

He is currently shooting for Shivappa, Vijay Milton’s directorial. The actor’s 124th film will be with writer-turned-director Ram Dhulipudi, which will be followed with his 125th film with Harsha.

This will be made under Geetha Pictures and shooting will begin in June-July. The film with Nanda will probably be his next. Meanwhile, the director will collaborate with Dhruva Sarja for the second time in Dubaari, produced by Uday K Mehta.

The film, made under Melodrama Studios, will have producers Gautam Reddy, Kirthi Chilukuri and Vivek Reddy bankrolling the project; an official announcement with further details will be made on Dr Rajkumar’s birthday

Now we are on Telegram too. Follow us for updates
TAGS
Nanda Kishore Shivarajkumar