'Icon’, ‘legend’, ‘great’… These are praises commonly thrown about in eulogies.
For once, in the case of Sridevi, these will all be relevant descriptions

You have to wonder. At what point does an actor turn into a star? Or as is being said in the case of Sridevi, ‘female superstar’. When did she stop being just a heroine and become something so much more? Was it when she acted in those unforgettable films with Rajinikanth and Kamal Haasan? Was it when she became part of super hit films in other languages? Or was it when she stepped into Hindi cinema without really knowing the language, but established herself as a legend anyway?

Actors are artistic, stars aspirational. You admire actors, you want to emulate stars. There’s no doubt Sridevi was a star. An entire generation of women modelled themselves after her. They took great pains to match the colour of their sarees with their bindis… because Sridevi did so. My mother wistfully remembers a time when women would cut their hair to make sure fringes fell over the eyebrows… because Sridevi did so. Those expressive eyes, that baby-faced innocence. It wasn’t just women who were captivated; the men were enchanted too. Very rarely do you get an actor who charms both genders so.
In retrospect, it seems that her success in cinema was never really in doubt.

It seems she was handpicked by cinema for greatness. Her life, after all, was inextricably linked with the movies. You could say she was born into cinema, given that she began acting at four, an age when many of us likely needed assistance with eating and sleeping. When Bharathiraja’s landmark film, 16 Vayadhinile, got released, Sridevi was 14! Let that sink in for a moment. F-O-U-R-T-E-E-N. And she was already a year old as a heroine by then. 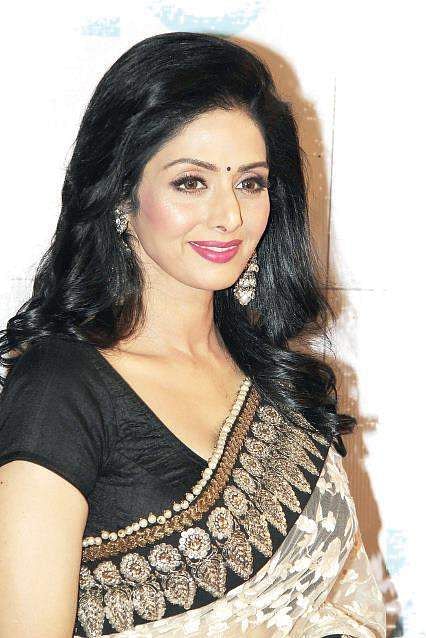 Cinema had clearly adopted her as its own, and almost prophetically, she walked into success everywhere. Tamil, Telugu, Malayalam… and eventually, the journey to Bollywood that many, many South Indian heroines over the decades have since followed as a career blueprint. This isn’t just about acting ability. This isn’t just about good looks either. This is about something else…. this is about taking naturally to a medium. This is about a quiet unassuming girl born in Sivakasi appealing to the imagination of a country, and becoming a ‘Female Superstar’.

This is about a heroine, who regardless of the significance of her characters, illuminated theatres with blinding radiance that often overshadowed the film’s heroes. Is it even a surprise that she looked absolutely at home playing the ethereal, celestial being in the Telugu hit, Jagadeka Veerudu Athiloka Sundari? Her life has been so interwoven with cinema that even after she’s passed away, she’s got a film (Shahrukh’s Zero) up for release.

There is one other like her — another actor who stepped into films as a child, who’s since gone on to become a cinematic great. I’m referring to Kamal Haasan, of course, and it’s almost magical that some of the best work Sridevi did in Tamil cinema came in films also starring Kamal: 16 Vayadhinile, Sigappu Rojakkal, Varumaiyin Niram Sigappu, Vaazhve Maayam, Moondraam Pirai… Two children born and raised in cinema, realising their own greatness and cementing their reputation as legends, all the while combining to create enduring art. It’s the stuff of stories.

‘Icon’, ‘legend’, ‘great’… These are praises commonly thrown about in eulogies. For once, in the case of Sridevi, these will all be relevant descriptions. Her passing away comes as a bolt from the blue, a rude shock that will take time to sink in. But one thing is for sure. It makes our age feel more pronounced, and has robbed some colour of the snapshots in our memory. Another star returns to the sky, and our world is that much more darker.

Now we are on Telegram too. Follow us for updates
TAGS
Sridevi