During the shoot of Kamal's Nammal (2002), cameraman P Sukumar was sitting on a 22 feet high crane at the Government Engineering College in Thrissur. Stills photographer Jayaprakash Payyanur was standing next to the crane. At that time, he was using an analog camera. Suddenly, he noticed that his film roll had finished. So, he stepped away to get a new one. At that moment, the crane fell where he had been standing. “I escaped death by a few inches,” he says.

Sukumar also fell from a height. He was immediately rushed to the hospital. “But surprisingly he had very few injuries and no fractures at all,” says Jayaprakash. He re-joined the shoot a few days later.
An investigation revealed that a screw in the central joint broke and caused the break-up of the crane. “On every shoot, you need a lot of luck so that there are no mishaps,” says Jayaprakash.

But sometimes, accidents do occur. The shoot for Make-up Man (2011) was taking place at Ramoji Film City, near Hyderabad. Prithviraj, who was doing a guest role, was doing a dance sequence with the heroine. “Prithviraj was dancing on the edge of the fountain,” says Jayaprakash. “Unfortunately, he slipped. He shouted, 'Aiyoo' as he fell.” 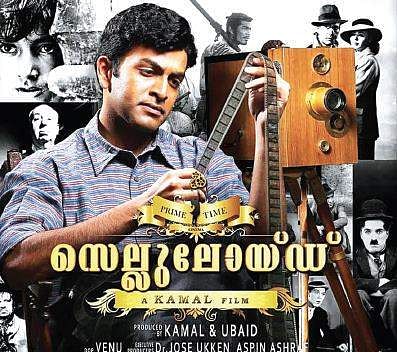 Prithviraj was in a lot of pain. “He was immediately taken to his room,” says Jayaprakash. “Ice cubes wrapped in a towel was pressed against his leg. But what was most remarkable was that, despite the pain, he returned to the set within one-and-a-half hours and the shoot resumed. All of us were amazed at his dedication.”Sometimes, there are near misses.

In the film Finger Print (2005), the shooting was taking place near the Tripunithara bridge. The heroes were Jayaram and Indrajith. Jayaprakash wanted some action stills of both of them. “So I decided I would make them walk down the bridge and take the shots,” says Jayaprakash. “I was steadily going back as they walked forward.”

Suddenly Jayaram shouted, “Stop at once.”
Jayaprakash got so shocked by the tone of voice he stopped immediately.
Then Jayaram said, “Now look back.”That was when Jayaprakash saw a hole the size of a well. “I was just one step away from falling through,” he says. “Jayaram said the right thing. If he said, 'JP, you might fall, be careful, I might have continued walking, looked back and maybe could have fallen in. But his command to stop at once worked. I did not look back.”

Apart from mishaps, sometimes a tragedy can take place. One day, the crew for the film, Celluloid were getting ready for a shoot in Mysore. Everybody was busy with their assigned tasks. The cooks were getting the meals prepared, the costumers were getting the dresses ready, the light boys were putting up the lights, but in the art department one boy, Dinesh Kumar (name changed), a carpenter, did not turn up for work.
People went to look for him. Amazingly, he had died in the night because of a massive heart attack. “Dinesh was only 23 years old,” says Jayaprakash. “He was from Kannur and had a wife and a child. His death deeply affected all of us.”

The shoot was stopped for the day. It was only Dinesh's second film. The night
before, he had dinner with everybody before he went to sleep. “Who could have imagined his life would end so suddenly,” says Jayaprakash. “Dinesh was not from a well-off family. It was decided that we would collect some money.”

Everybody contributed, including the hero Prithviraj as well as the director Kamal.“In the end, we collected Rs 2.5 lakh,” says Jayaprakash. “A large part of it we put it in a bank account while we gave the rest to the widow. All of us were glad that we could do a bit though nothing will erase the pain and loss that the family has gone through.”