'Sudani from Nigeria' director Zakariya overwhelmed with praise for film

A man stepped out of Padma theatre, after seeing the film, got hit by a bike, called the director, said he wasn't angry because of film's impact.

On Saturday, a man stepped out of Padma theatre, in Kochi, after seeing Sudani from Nigeria. He sat on his bike, rode out onto crowded MG Road, but was soon hit by another bike. He called up the film's debutant director Zakariya and said, “In normal circumstances, I would have shouted at him and got angry. But I was in a different mood after seeing the film. I just asked him, 'Are you okay?' That was the impact of the film on me. I wanted to tell you this.”

When Zakariya heard this, he was moved. He is getting a lot of calls – from well-wishers, friends, relatives and members of the Malayalam film industry. Asked whether he ever felt during the 36-day shoot whether the film would be a hit, the Malappuram-based Zakariya, who had come to Kochi for a brief visit, says, “I felt that only 40 percent of the people would like the film. One reason is that there are no stars, except for Soubin Shahir, and no heroines.”

But Zakariya admits that Soubin is the fulcrum of the film. “His acting is brilliant,” he says. But when Zakariya first went and meet him at his home in Fort Kochi and narrated the script, Soubin was non-committal and just said, “We will do the film.” The story is inspired by the Sevens football that is a unique part of the culture of Mallapuram. “Every year, there are lots of Sevens tournaments in the region,” says Zakariya. “There is a lot of interest and drama surrounding these matches. But what makes it exciting is the presence of so many players from Africa. In one team, you can have three Africans. There are more than three hundred players and they stay in ordinary houses and lodges. So the idea of doing a film about these people was the inspiration behind Sudani from Nigeria.” 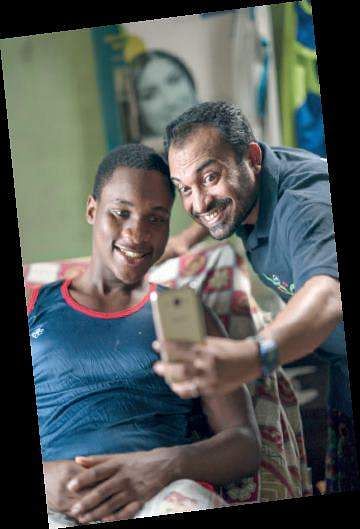 And the person who played the African player in the film is the 6' tall Nigerian called Samuel
Abiola Robinson who did not have much experience of playing football. So, he had to do a lot of training on football grounds where the Sevens tournaments took place. “I also trained at the HiLite Mall in Kozhikode, where they have a place for football training on the terrace called Forza Nets.” Samuel had to do other training too. “My character has an injury while playing,” he says. “So I had to practise on how to walk on crutches.”

And he had some nerve-wracking moments. There was a scene when he had to jump into a pond at Kozhikode. So, he went to the deep end and waited. When Zakariya shouted, “Action,” Samuel jumped in. And went right to the bottom, which was about 12 feet deep. “Although I know swimming, I panicked and remained down for a few secs, struggling for air, before the people on the set realised I was in trouble,” says Samuel. “So they quickly dived in and pulled me out. It was an embarrassing
moment for me. I was actually so close to the shore.”

But all this has been made up by the reaction to the film. “It has been overwhelming,” says
Samuel. “They keep saying, 'I love you Sudu'. And that has become my name. Everybody keeps calling me that. I feel blessed to be part of this film. I feel very welcome.”

Not surprisingly, Samuel is a fan of all things Kerala. “The people are very kind and have this huge family network and kinship with each other,” he says. “There were numerous occasions when we would be filming somewhere and some random family would come to the set and invite us for dinner. I was amazed by their kindness. In Nigeria, people are very independent and it is 'every man for himself'. So, this was a refreshing change for me.”

Indeed, the movie is a refreshing change, portraying with great simplicity and deep emotion the Muslim life in Malabar. And Zakariya has highlighted one aspect that nobody seems to know about: the poor treatment of stepfathers by the children of the first family. “When I would walk down the streets, I would see these stepfathers wandering from place to place. It would seem as if they were in some form of internal exile.”

But the audience is not in exile from the film. Instead, they are flocking to the theatres as word of mouth and social media are sending the film to stratospheric heights. “This is going to be one of the greatest hits in recent times,” says a trade analyst.

Now we are on Telegram too. Follow us for updates
TAGS
Malayalam film industry Soubin shahir Zakariya Sudani from Nigeria