It’s apparent from the trailer of Allu Ramendran that Kunchacko Boban will be seen in a never-seen-before look.

It’s apparent from the trailer of Allu Ramendran that Kunchacko Boban will be seen in a never-seen-before look. Debutant Bilahari K Raj directs the film which also features Krishna Shankar, Aparna Murali, and Chandini Sreedharan in principal roles. Aparna plays Krishna Shankar’s love interest while Chandini plays Kunchacko Boban’s wife.“It’s about how a police officer named Ramendran came to be known as Allu Ramendran. There is a story behind the ‘Allu’ nickname, and he gets irritated whenever someone calls him that,” says Sajin Cherukayil, who co-wrote the script with Girish AD and Vineeth Vasudevan. 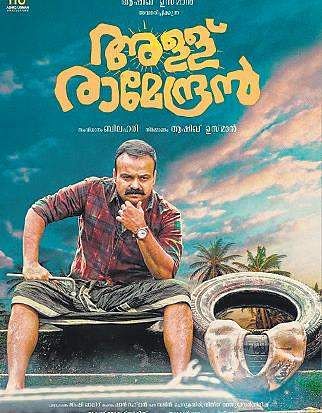 “It’s primarily a comedy,” Sajin adds. “But because of the character’s nature, a few ‘mass’ elements find their way into the story. Ramendran is an ordinary cop who becomes increasingly frustrated and violent after being trapped in a peculiar situation. The script slightly deviates from the usual three-act structure, and is filled with comical situations.”

Sajin, who is also an actor, was recently seen as one of the kidnappers in the Samyuktha Menon-starrer Lilli. Bilahari was an associate on the film. Sajin had been friends with him, Girish, and Vineeth for a long time. Their collaboration began with Porattam, a yet-to-be-released low-budget feature. Porattam’s trailer had come out last year. Allu Ramendran’s editor Akash Joseph Varghese had also been part of it.

It was while Bilahari and Sajin were making another independent feature, something more light-hearted, that the idea of Allu Ramendran came to them. “A friend of ours, Shyam, told us this one line which served as a jumping off point. The main story idea came to me on the set of Lilli, and we were discussing ideas concurrently with Girish and Vineeth as well. Me, Girish and Vineeth then decided to write the script together. The script grew beyond what we had originally envisioned after Kunchacko Boban was cast.”

In addition to Girish and Vineeth, their friends Sanath Sivaraj and Anuradha Indira served as assistant directors on the film while another friend Varun Dhara got involved as an associate scriptwriter. Sajin informs us that Girish is making his directorial debut soon with an untitled film backed by editor Shameer Muhammed and cinematographer Jomon T John. A short film directed by Girish titled Mukoothi (nose ring) went viral recently. Anuradha’s short film Happy Together debuted online a few days back.

On being asked if the need to be politically correct bothers him while writing a script, he says it does. “In Allu Ramendran, we had to change the religion of a certain character because we felt it would be politically incorrect, even though our intentions were good. It has become difficult to tell what is right and what is wrong anymore.”

Allu Ramendran, produced by Ashiq Usman under the banner of Ashiq Usman Productions, has been shot by Jimshi Khalid (brother of Ee Ma Yau cinematographer Shyju Khalid). Shaan Rahman has composed the music. An energetic dance track featuring Neeraj Madhav, titled Ethaatha Kombaaneda, was released a couple of days back. The film will hit theatres tomorrow.