An old man loses his memory, after which he retires from a lifetime of labour. A simple lesson on deep-rooted patriarchy is told through the tale of young siblings at the dining table. In a similar setting, new wife mounts a minor act of rebellion against her patronising husband.

Alex, a virtual assistant, is the only friend and confidant of a 60-something widow. A globe-trotting husband knows how the world works but is clueless about his wife. A coconut plucker toils all day to afford little pleasures of life. 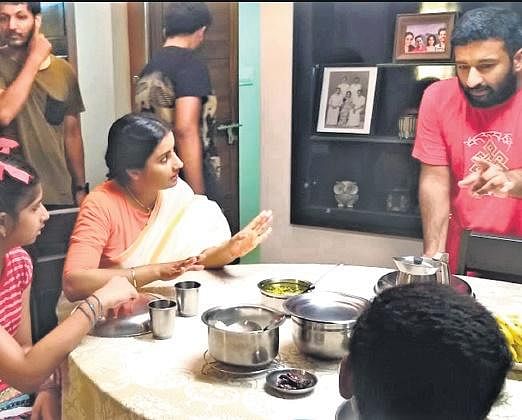 While each chapter is standalone, all stories in the 16-minute short film are tied to one another with implicit themes of age and gender served under a common motif of food.

“Broadly speaking, a jump cut in a film is used to elicit a response and emotion with a sudden change or distortion. It is meant to make the audience notice something. We have used a similar trope to highlight a few ingrained and unfair norms in society.

The inclusion of food in the story arcs was not a conscious choice but it is so universal and commonplace. Most familial conversations centre around food, so it is important to understand cultural conditioning through consumption,” says Ajay who owns a production house called Sisyphus Rocks Films.

The distortion from the norm that each narrative elucidates is also evident in the glitch animation of the story titles at the end of each chapter. Most of the cast is new actors but a few familiar faces greet the viewers. Achuthanandan of Maheshinte Prathikaram fame portrays the character of an insensitive husband while Ajay Shanker of Hindi film Parmaanu and Devika Bhaagi of Virus also star in crucial roles.

Now we are on Telegram too. Follow us for updates
TAGS
Ajay Govind Jump Cuts