The teaser poster was shared by filmmaker Gautham Vasudev Menon, Anil Kapoor, Cyrus Broacha, and Madhavan aside from a host of celebrities from Malayalam and South Indian cinema.

Manju Warrier and Soubin Shahir are set to reteam for debutant Mahesh Vettiyaar’s Vellarikka Pattanam. Bankrolled by Fullon Studios, the film will be lensed by Jayesh Nair. Manju and Soubin first worked together in Santosh Sivan’s upcoming Jack and Jill.Mahesh, who has previously worked on animation films and cartoons, has penned the script jointly with Sarath Krishna. The film is said to be a quirky, family-oriented entertainer.

The teaser poster was shared by filmmaker Gautham Vasudev Menon, Anil Kapoor, Cyrus Broacha, and Madhavan aside from a host of celebrities from Malayalam and South Indian cinema. Appu Bhattathiri and Arju Benn will be editing the film while Sachin Shankor Mannath will compose the music to Vinayak Sasikumar’s lyrics. 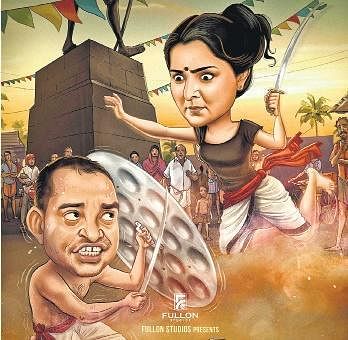 Manju’s other upcoming films include her brother Madhu Warrier’s Lalitham Sundaram, Sanal Kumar Sasidharan’s Kayattam, The Priest (with Mammootty), and Padavettu (with Nivin Pauly). She is also part of Priyadarshan’s big-budget Marakkar, slated for release next year. Soubin also has Siddarth Barathan’s Jinn and Zakariya’s Halal Love Story coming up next.

More from Entertainment Malayalam.
Now we are on Telegram too. Follow us for updates
TAGS
Soubin Shahir Mahesh Vettiyaar Vellarikka Pattanam Manju Warrier